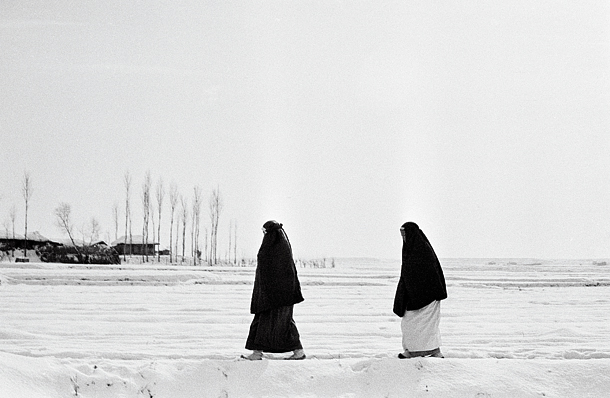 Few people saw good in the ruins of postwar-Korea.

Poverty, devastation, division, disarray, hopelessness and bleakness are often what are associated with Korea reeling from the Korean War (1950-53).

But that was not the case in the eyes of photographer Han Youngsoo. 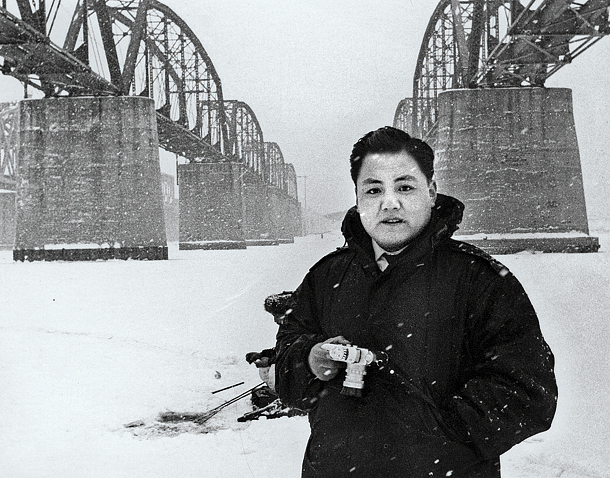 In the desolate landscape of postwar Korea, he captured modern sophistication from people’s everyday lives and their facial expressions.

This is perhaps why although about 60 years have passed, his photographs remain so stunning.

His work is currently on display at the ICP gallery at Mana Contemporary in New Jersey.

Founded by Cornell Capa in 1974, the International Center of Photography (ICP) is the world’s leading institution dedicated to photography and visual culture. Cornell Capa is the younger brother of Robert Capa, who co-founded in 1947 Magnum Photos, the first cooperative agency for freelance photographers worldwide. ICP at Mana is a 15,000-square-foot space that houses a gallery, lab, research area and the ICP Collections.

Titled “Han Youngsoo: Photographs of Seoul 1956-63,” the exhibition on Han shows 38 prints selected by Christopher Phillips, an adjunct curator at ICP, and Choi Doo-eun, an adjunct curator at Waterfall Mansion & Gallery. The exhibition, the first major show of Han’s work in the U.S., has been co-organized by ICP and Waterfall Mansion & Gallery with the collaboration of the Han Youngsoo Foundation in Seoul.

ICP’s acquisition committee has also purchased Han’s prints to add them to its collection. Han is reportedly the first Korean photographer to have his work in the institution’s collection.

Born in 1933 in Kaesong, which is in today’s North Korea, Han studied drawing and painting and pursued photography as a hobby. After the war, he began his career as a professional photographer. He was a member of Shinsunwhue (New Line Group), an association of socially concerned realist photographers. In the 1960s, he set up Han’s Photo studio and became highly successful in advertising and fashion photography. 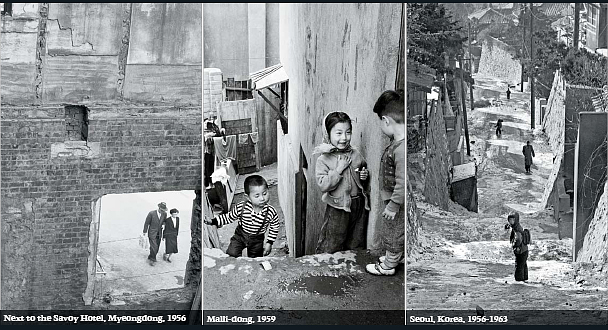 “Not only had it mercilessly trampled down on our beloved families and neighbors, but also their happiness, hope, and furthermore, humanity itself. As if that wasn’t enough, by the end it had utterly destroyed everything on the face of the earth leaving behind ruins, despair, famine and sorrow.”

Some images he saw were haunting, he remembered.

“At the height of the Korean War, I was moving across the front lines as a soldier experiencing this tragedy, witnessing countless scenes that enraged me,” he recollected.

But when he returned to Seoul at the war’s end, he saw that life went on nevertheless and not just that but a new modern city with an urban society was emerging.

“Although a sense of futility, sadness, shock and despair lingered, people were putting down their roots, trying to find their place in this world,” Han said.

‘Though struggling with the multifaceted after-effects of the Korean War, the 1950s was a period of recovery. I was able to find hope watching cities and rural communities being rebuilt; in the bustling markets and the sparkling eyes of children, the laughter I had forgotten. Slowly but steadily I was recovering my own humanity.”

That perhaps explains his photos of people in modern Western suits in front of a cinema; a couple tending to their sidewalk used-book store with the woman smoking a cigarette and the man in a fedora hat; and a young woman in thick makeup strutting down the streets wearing a sleek fur coat. 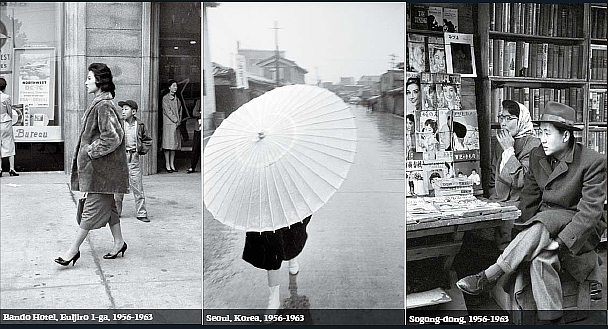 A look at Han Youngsoo’s work makes it evident that he paid special attention to women.

In fact, Choi said she was drawn to Han’s work because of his attention to the “new women.”

“In early 2016, I took part in planning an exhibition, ‘The Needs for My Care’ at Waterfall Mansion and Gallery, whose theme was women,” Choi said. “There were photos that drew my particular attention: A young girl giving a piggyback to a baby; women washing clothes in the Han River; and a self-satisfied woman strolling in a sleek fur coat on what appears to be a warm fall day.”

Choi said the street scenes captured various women in Seoul, which was beginning to be reborn on the heels of the tragedy of war.

“There were also photographs that clearly showed the changing status of Korean women, who were then finding new roles as entrepreneurs or consumers as suggested in the views of narrow streets lined with well-stocked fashion boutiques. It turned out they were all the work of Han Youngsoo.”

And it’s this social awareness that ICP took note of.

“Seen from today’s vantage point, his photographs come as a surprise,” Christopher Phillips of ICP said. “With their impeccable composition, flawless timing and scrupulous attention to social detail, they suggest the work of a long-lost Korean cousin of such early Magnum photographers as Henri Cartier-Bresson, David Seymour (Chim) and Marc Riboud.” 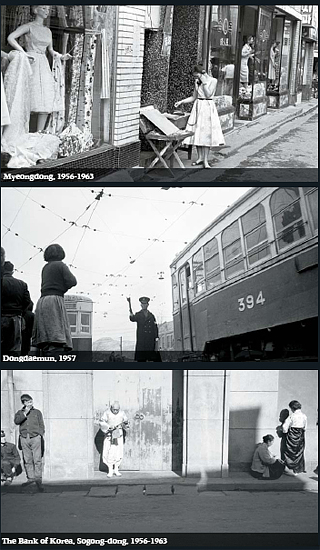 Choi said Han sought to tell the world that there’s more to Korea than just ruins from the war.

“People who are in a hurry because the weather is good, or harsh with rain or snow, and the movement of the automobiles and streetcars,” Choi says, “that all showed how multi-faceted modern, urban culture was fast taking roots in Seoul.”

“So what does it mean to take beautiful photographs of Seoul that was undergoing a tragedy?,” Lee Yeong-jun, a photography critic and a professor of photography arts at Kaywon University, throws out the question when asked about his thoughts on the work of Han Youngsoo.

“It’s important how a photographer views the world. Since the 1950s, [photographers] were interested in modern system and visual traces that came about from the system.”

Lee said it appears Han attempted to achieve a modern perspective befitting the scenes he was shooting. “He showed a whole new side of Seoul. In the sense that he surpassed the impoverished reality of Korea in the 1950s and 60s, his photographs are surreal.”

Han died in 1999, but his daughter Sun-jung established the Han Youngsoo Foundation to preserve and promote his work.

It appears interest in his work has been growing in recent years. His work has been introduced at the Rencontres d’Arles photo festival in 2014, and in two books in Korea, “Seoul: Modern Times” (2014), and “Once Upon a Time” (2015).

The “Han Youngsoo: Photographs of Seoul 1956?63” exhibition in the ICP gallery at Mana Contemporary in New Jersey runs until June 9.

However, Choi, who is also an adjunct curator for Art Center Nabi in Seoul, said given that interest in Han’s work is growing and there are many of his photographs that have yet to be shown to public there is a chance that there will be more showings of his work in the U.S. and elsewhere.

“It’s been said that there are many photos of his that haven’t been featured yet: like those from his early career, those taken after the 1960s which was the peak of his career as an advertising photographer, and the landscape photographs that he took as he traveled across the country every weekend,” Choi said. “I also hope that interest in Han could grow into global interest in other Korean photographers.”