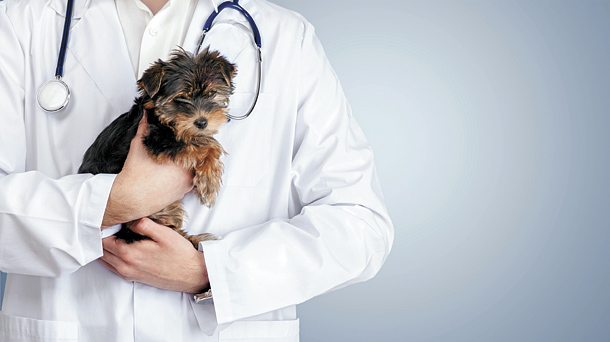 Sleep eludes Mrs. Ahn from Seongnam, Gyeonggi, these days as her beloved pet Jjong-ah, a 13-year-old Maltese, suffers from a severe case of diabetes. Not only is it difficult to watch Jjong-ah in agonizing pain, but the medical bills to cover the dog’s treatment, including insulin shots and a regular checkup, which could go as high as 700,000 won ($625) a month, puts a heavy burden on Ahn and her family. “It’s only right to provide [Jjong-ah] necessary medical care like we would for other family members,” Ahn said. “But truth be told, [without insurance] the medical bill is quite burdensome.”

With the number of pet owners in Korea rising, more such as Ahn are in a desperate need of money to finance expensive medical bills for their pets. And to satisfy the demand of “pet finance,” a growing number of insurance and financial companies in Korea are unveiling products ranging from medical insurance to cards and even trusts.

The size of the local pet market, including food, treats and toys, exceeded 2 trillion won and it is expected to swell to as much as 5.81 trillion won by 2020, according to NongHyup Economic Research Institute. A report by KB Financial Group’s research division said more people are relying on animals as companions as the size of family gets smaller and society ages rapidly. The rising demand for financial products for pets follows the trend. “With more people considering pets as their family member, consumer demand to alleviate burdens stemming from pets’ medical bills will expand,” said Hwang Won-kyung, a researcher at KB Financial Group. “Financial companies must take preemptive measure and create related products [to meet the demand].”

This is where pet insurance comes in.

Pet insurance, whose popularity somewhat dwindled after it first came out in the early 2000s, is regaining its ground in the market. The policies depending on options cover a wide range of veterinarian services, from surgery to regular checkups and visits to the vet. Familiaris Dog Insurance by Samsung Fire & Marine Insurance, for instance, witnessed the number of subscriptions catapult from 41 in 2008 to 1,116 last year. The policy covers 70 percent of vet costs in case of injury or disease. It also covers property damage caused by pets.

Insurance fees vary depending on the type of the pet or its health condition. For a 1-year-old Maltese, the yearly insurance cost would be 320,000 won, or about 27,000 won per month, on average.

As Samsung’s policy covers only dogs, cat owners can turn to Lotte My Pet Insurance. Depending on the policy, the insurance will cover just surgery and hospital bills or as much as regular visits. The insurer pays as much as 1.5 million won for an operation and 100,000 won a day for hospital visits or stays. Policyholders get a 10 percent discount for more than one pet. Average annual insurance fees range from 100,000 won to 350,000 won. 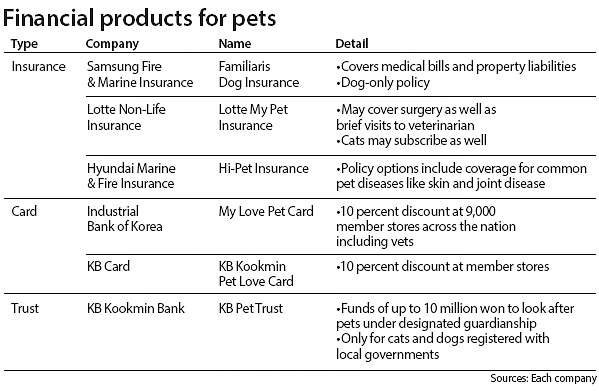 If pet insurance comes in handy when owners have to cough up a large chunk of money instantaneously, “pet cards” issued by some local banks or card companies help with everyday expenses for pet products and basic vaccination.

“My Love Pet Card” by Industrial Bank of Korea gives a 10 percent discount at nearly 9,000 member stores across the nation, including veterinarian and pet stores and a 5 percent discount on pet food at large retail stores and online shopping sites. While KB Card’s “KB Kookmin Pet Love Card” offers similar benefits, a part of the card fee is donated to charities and care centers for abandoned pets.

A more advanced form of pet finance, however, has recently debuted in the market - KB Pet Trust by KB Kookmin Bank. A pet owner can create a trust fund of up to 10 million won to be given to a designated guardian in case the owner passes away.

Although only dog owners could create funds when the insurance first was set up in October, the fund target now includes cats as well due to repeated inquiries and demand from cat owners.