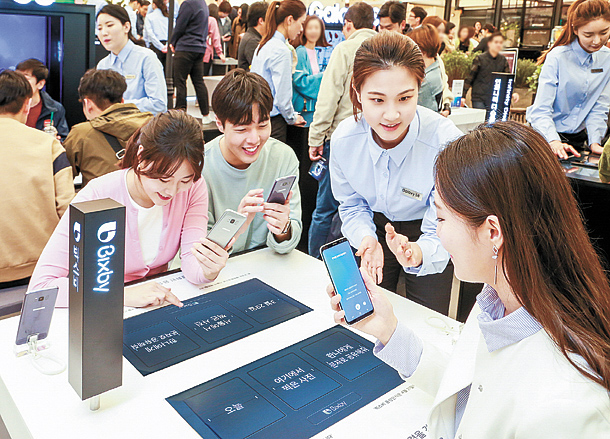 If there’s one way to describe the changes happening at Samsung after the conglomerate dismantled its notoriously secretive central planning office known as the Future Strategy Office, it might be abolition of all top-down activities.

At the beginning of last month, the tech giant announced a corporate reform plan that included dismantlement of the controversial office, resignation of the department’s leaders, a ban on government lobbying work and pursuit of independent management among affiliates. 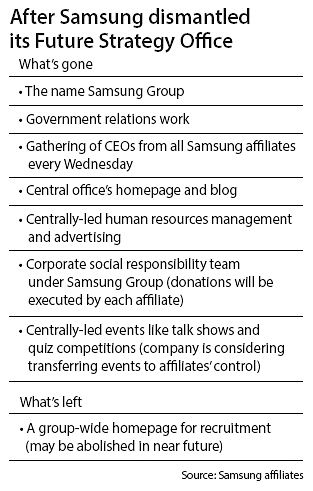 The move came after Samsung Electronics’ de facto leader, Vice Chairman Lee Jae-yong, vowed to abolish the office during a December parliamentary hearing on the bribery scandal involving now-ousted President Park Geun-hye and her confidante Choi Soon-sil, who was said to have received vast sums of money from corporations in exchange for political favors.

Samsung’s Future Strategy Office was accused of orchestrating those donations.

“Tasks formerly led by the group’s central office, like human resources management, advertising and public relations, are now being transferred to each affiliate so they can execute plans separately based on their needs,” a source at Samsung said.

The human resources team from the abolished office has moved to Samsung Electronics and is finishing employee recruitment for the first half of this year. Social contribution programs that were led by the central office will be handed over to each affiliate. Larger events like year-end donation drives for the nonprofit Community Chest of Korea will likely be taken over by Samsung Electronics.

With the Future Strategy Office gone, the electronics unit has taken on an outsize role in the conglomerate, generating criticism that the group’s largest affiliate has become its de facto central planning unit. However, a source at Samsung insisted that central planning tasks have been evenly dispersed across affiliates.

On the possibility of the Future Strategy Office coming back in the future, a Samsung Electronics spokesperson said there was “absolutely no possibility.”

“Our employees at Samsung Electronics don’t even ask work-related questions to former Future Strategy Office staff to stay away from spurring speculation that the electronics unit is taking on the role of the central planning unit,” the spokesperson said on the condition of anonymity.

Given its long history of corporate secrecy, Samsung will be hard-pressed to free itself from any speculation about the rebirth of its central planning office if it doesn’t come up with a feasible plan to show how it will control all its affiliates without one.

However, during a shareholders meeting on March 24, Samsung indicated it would postpone such restructuring. Kwon Oh-hyun, vice chairman and CEO of Samsung Electronics, said the company “found several negative aftereffects could occur following the transition.”

“It is practically impossible to manage nearly 2,000 companies, including Samsung affiliates, business partners and suppliers, without a central body set up for coordination,” Professor Cho said. “If Samsung has to rule its empire without a central powerhouse at a time when structural reform is not available, the company is chaining its businesses in the future to its mistakes of the past.”