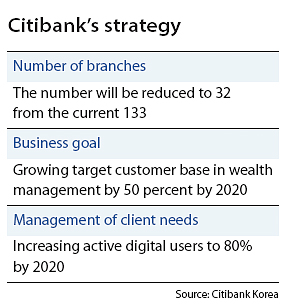 Citibank is set to drastically shrink its branch network in Korea by closing 101 retail branches or nearly 80 percent, the bank confirmed Tuesday.

The bank’s Seoul office, however, claimed that this is not a restructuring to lay off employees but a move targeted at raising its efficiency through IT convergence.

The U.S.-based bank said it will reorient its resources and focus on wealth management centers and digital banking services starting in July.

“Banking today is less about branches and more about digital,” said Brendan Carney, consumer banking head of Citibank Korea. “We are deploying our bankers to support the changing preferences of our clients across new innovative wealth and lending hubs and central engagement teams.

“A priority is also ensuring our teams are trained and able to serve clients across multiple channels so that Citi is offering Korea’s leading digital banking experience,” said Carney.

Of its 133 branches across the country, only 32 will survive, mostly in Seoul and the nearby Gyeonggi area. The bank has a total of 21 branches outside Seoul and Gyeonggi, which will be reduced to four in big cities including Busan and Daegu.


Equipped with around 100 staffers, the centers are designed to provide a broad range of banking and asset management services.

Under the new business plan, Citi hopes to double assets in its wealth management business by 2020 and to increase its deposits in the country by 30 percent.

Still, the bank’s labor union fears any impact on jobs, though the bank’s management denies the concerns.

“We have no plans to reduce the number of employees,” a source at Citibank Korea said.

“These targets are in response to the changing preferences of our clients, for whom 95 percent of transactions now happen outside a branch. There will be no impact on staff numbers but the branch network will be optimized.”

Even if the head count remains the same, the union is worried that bank staff will be relegated to less secure jobs, such as call center tellers.

“If all workers from the closed branches will be able to work at the wealth management centers, it will be fine,” said Kim Ho-jae, vice chairman of Citibank’s labor union. “But that is impossible.”