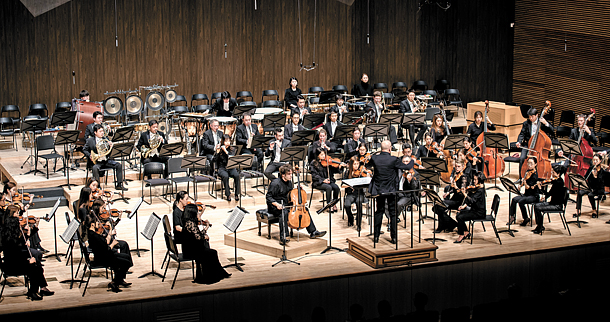 TONGYEONG, South Gyeongsang - This year, Tongyeong is in a celebratory mood as it marks the 100th birthday of internationally renowned Korean composer Isang Yun (1917-95), whose hometown is this port city that boasts the beauties of nature. Yun’s music, according to international critics, can be traced back to his childhood where he had spent most of his time close to nature, shaping his world of music.

To kick off this year’s Tongyeong International Music Festival (TIMF), which began on Friday, the festival organizers decided to present one of Yun’s most serious pieces, the “Cello Concerto” (1976). As a cellist and a composer, Yun’s extensive works include several pieces for the cello including the “Cello Concerto” and the “Seven Etudes for Violoncello solo” (1993). 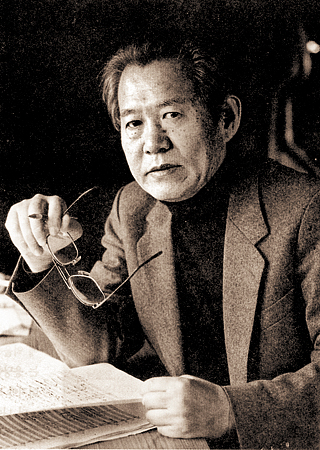 When the Tongyeong Festival Orchestra appeared on stage for the opening performance of the “Cello Concerto” on Friday evening at the Tongyeong Concert Hall in Tongyeong, South Gyeongsang, however, the cello section of the orchestra was missing. Instead, German-French cellist Nicolas Altstaedt came to the stage, not to accompany the orchestra, but more to show the painful struggle alone against the other sounds of music, as if the cello was in a battle alone fighting for itself.

Indeed, the “Cello Concerto” is an autobiographical piece that was written between 1975 and 1976 to mirror Yun’s experience of being imprisoned after being kidnapped by the Korean Central Intelligence Agency under the military government. Yun was accused of treason for visiting North Korea several years earlier. He was given the death penalty, but was released after two years thanks to resistance from the international music community.

In Yun’s wife Lee Soo-ja’s book “My Husband, Isang Yun,” she describes her husbands’ time in the prison: “At the end of each bleak and weary day in the prison cell comes the sound of a trumpet, a sound announcing the time for bed. With the doleful sound of a trumpet begins the dead silence of the night. I’m not able to sleep deep into the night. Right then, I hear the sound of a moktak (wooden percussion instrument used for chanting by Buddhist clergy) resonating from a Buddhist temple in a forest far away and think to myself: this is the sound of a monk consoling the soul of a prisoner being executed.”

That image can be heard in Yun’s “Cello Concerto.” The monologue by the cello resemble those of geomungo, a traditional Korean instrument of the zither family, being plucked, presenting the sounds of Korea. The bass clarinet and alto flute managed to reproduce the sound of an evening trumpet that’s described in the book, and there’s even the sound of moktak.

Although Yun’s contemporary compositions can be difficult for people to take in, his works have been praised internationally for the inventiveness with which he fused the Western classical music styles with traditional Korean sounds, using only classical music instruments.

“He is the only Korean composer of the 20th century that gained international importance,” said Florian Riem, CEO of Tongyeong International Music Festival Foundation. “He is still a household name in Western contemporary music and he opened the door for a new generation of young Korean composers.” 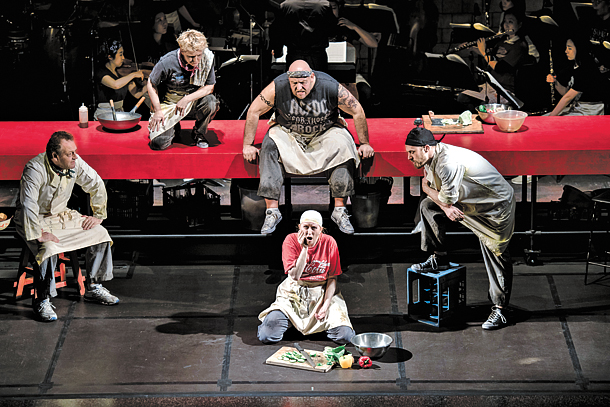 Another performance at the festival was the opera “The Golden Dragon,” directed by Michael McCarthy. [TIMF]

To allow the audience to fully enjoy the festival, which is presenting many of Yun’s contemporary pieces that are unfamiliar to most, the organizers carefully thought-out the program by including familiar classical pieces in between Yun’s works.

“I know Yun’s music is not easy to listen to,” said Kang Myung-sik, 56, from Tongyeong who attended the opening concert with his wife on Friday. “But the detailed information on Yun and his music in the lobby as well as in the booklets really helped me to understand his music better.”

“Plus, it was good that the organizers included many classical pieces that are familiar to our ears as well,” he added.

“I think the combination is absolutely necessary to see the connection between Western style and traditional Korean style,” said German cellist Jens Peter Maintz who visited Tongyeong to perform during the festival.

“For example, on Sunday, the Isang Yun Soloists Berlin played Yun’s pieces and then Debussy’s ‘Sonata for Flute, Viola and Harp.’ I would say Debussy’s musical language is close to Yun so it’s important to show these relations and play these pieces in one program as it shows Yun’s position in music history.”

Many friends and artists closely related to Yun visited Tongyeong for the festival, either to perform or to enjoy Yun’s compositions that are being performed during the festival, which ends April 9.

Among them are Wolfgang Sparrer, a renowned musicologist and author of numerous texts on Yun and his music.

He even assembled a formidable ensemble for the festival called the Isang Yun Soloists Berlin that will stage several performances throughout the festival.

For more information on pricing or scheduling, visit www.timf.org.