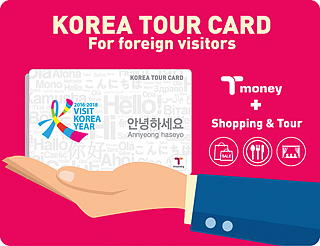 The Korea Tour Card has seen 10,000 cards sold in only two months since its release, the Visit Korea Committee has said.

The Korea Tour Card, a transportation fare card for foreign tourists, which was released in late January by the non-profit organization under the Ministry of Culture, Sports and Tourism, offers benefits and discounts when presented at tourism sites, shops and performances provided by 25 different companies. It is also a transportation card, with nation-wide support for T-money, an automated fare collection system in Korea.

According to the sales statistics, 85 percent of all the sales came from convenience stores and Airport Express’s Travel Centers within the premises of the Incheon International Airport. The tour card is sold all across the nation, with sales not only limited to the metropolitan areas as Gangwon and Jeju also have vendors providing the tour card.

Starting from April, with the collaboration with Korea Smart Card, visitors to Korea now have the option of purchasing the card in vending machines located in Seoul Metro, lines one to four, and the Airport Express.

The tour card is set to expand its list of distributors, and will soon be offered online, as well.

“The initial reception to the Korea Tour Card has been fantastic,” said secretary-general of Visit Korea Committee, Han Kyung-ah, “the use of the card [which was limited to Seoul only] is being expanded to the outskirts of Seoul as we are aiming to expand the benefits of the tour card to other regions so that foreigners will be able to tour every inch of Korea conveniently with the Korea Tour Card.”

In celebration of the 2016-18 Visit Korea Year, organized by the Visit Korea Committee, holders of the card can receive benefits from various companies until the end of 2018. The remaining balance on the card can be refunded in a convenience store before leaving the country.