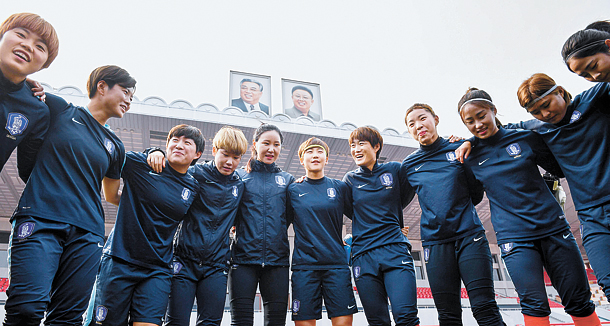 The North and South Korean women’s national football teams may be different, but looking at the picture taken at the Rungrado 1st of May Stadium in October 11, 1990, in front of 15,000 North Korean football fans, they look like one team wearing two different colored uniforms, red and white.

It’s been 27 years since that photo was taken. Again, the South Korean women’s national football team made a journey to Pyongyang to play a preliminary match for the Group B 2018 Asian Football Confederation (AFC) Asian Cup match at the Kim Il-sung Stadium. 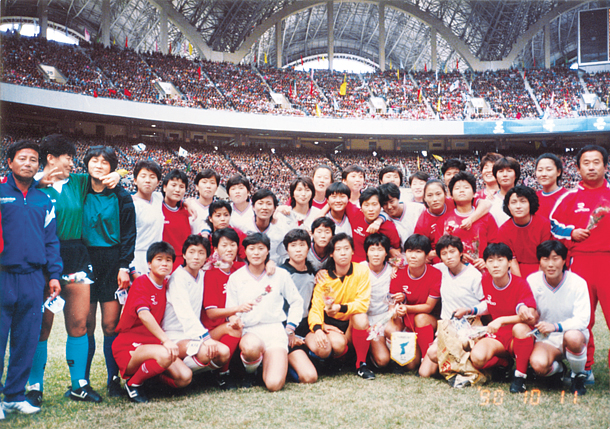 A photo of the North and South Korean women’s football teams in 1990. [LEE JAE-HYUNG]

The JoongAng Ilbo, an affiliate of the Korea JoongAng Daily, met with Park Kyung-hwa, former manager of the South Korean women’s national football team, Lee Myung-hwa and Lim Eun-joo to hear about their trip to North Korea in 1990.

“The fans were yelling ‘crush them’ since it was a match between the two Asian countries,” Lee said. “Just like they said, we got destroyed, losing 7-0. At the time, I was in high school and was scared about going to North Korea.”

When the South Korean national football team arrived at the Pyongyang International Airport, Lim said there were a large number of people to welcome the team.

“They were shaking our bus left to right as a means of welcoming us, but we felt tremendous fear from that.”

“There was a big gap in skill so rather than playing against them, we trained together,” Park said. “We played the practice game by mixing the two teams together.”

Aside from playing football, Lee also shared a funny episode that occurred from the fear South Koreans had towards North Korea.

“The Korea Football Association official told us how we should turn up the TV volume and not talk about Kim Il Sung because there may be a wiretap in our rooms,” Lee said. “And I still wonder about that, because one time, I said to myself that I wanted a pineapple, and the next day, there was a pineapple in my room.”

After the match between the North and South Korean men’s national football team, the women’s team came down to the stadium and took a picture together.

“Those 15,000 cheering fans sounded like a thunderstorm,” said Yoon Duk-yeo, manager of the South Korean women’s national football team who played for the men’s team in 1990. During the game, the North Korean referee intentionally gave a penalty kick to North Korea, which eventually led the team to win against South Korea 2-1.

“Choi In-young, our goalkeeper, got mad and threw a football to the other side of the field,” Yoon said. “As soon as he did that, the atmosphere at the stadium got frigid. But when North Korea won the match 2-1, they came up to us and apologized after the match.”

Upon completion of the match, the South Korean team got on a train back to South Korea through Panmunjom. In a short period of time, the two teams had grown fond of each other.

But unlike then, this year the two nations will be playing to advance to the 2018 AFC as well as the 2019 FIFA Women’s World Cup. The South Korean women’s national football team has developed significantly over the years, so the two countries are expected to have fierce competition throughout the game.