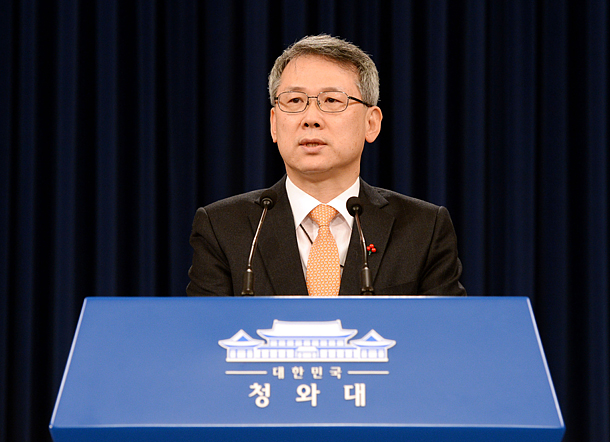 The Blue House announces a government revamp plan after the launch of the Park Geun-hye administration in 2013. [JOINT PRESS CORPS]

The Fair Trade Commission (FTC) is often referred to as a group of “economic prosecutors.” But in fact, it is more powerful as it also serves as a “court of first instance.” The impact of its decisions also goes beyond borders. For patent abuse, Qualcomm, a U.S. multinational semiconductor and telecommunications equipment company, was fined 1 trillion won ($889.4 million), and its business model was shaken. Airbnb, a lodging-sharing service, was ordered to modify the unfair refund policy and changed the terms and conditions that applied to its worldwide operation.

So the commission is a coveted assignment among young civil servants. Last year, three of the top five scorers in the civil service examination in the economic and finance sections applied for a position at the FTC. Naturally, higher agencies like the Ministry of Strategy and Finance and the Financial Services Commission’s prides were hurt. Some criticized the young elites for being materialistic, as working for the FTC does not involve overtime and leads to more opportunities after retirement.

Last year, the Ministry of Trade, Industry and Energy and other agencies were in a panic over the Alpha Go and AI shock. They could not handle the questions on how they would respond to the AI revolution. In the end, they came up with a makeshift plan with leftover R&D budget.

The Financial Services Commission (FSC) was even more pathetic as it tried to save Daewoo Shipbuilding and Marine Engineering. The time has past when it could twist the arms of a few banks, and it has to persuade creditors and investors to no avail. When threats like “take the rescue plan or lose money” didn’t work, the FSC started to beg.

Incoming officials must have detected the trend and chose a post where they would serve for decades. In the presidential election campaign, candidates are proposing to reshuffle the government organization. But disappointingly, their views and plans are not as insightful as those of incoming officials. Their plans lack long-term ideas to enhance competitiveness. It seems to be the same, outdated, pretentious reorganization. Perhaps they think the new organization will only last five years.

Most of all, the order of things is not right. The FTC was awarded the enforcement of the year prize by a renowned international journal. But the honor was stained as the commission was involved in the Choi Soon-sil scandal. Qualcomm argues that the FTC’s ruling was a result of helping Samsung. It originated from a call from the Blue House.

Even with good intentions, pressure from the Blue House makes officials stretch their power, distort policies and leads to bad moves. Before discussing a government organizational reshuffle, the Blue House secretariat needs to be completely overhauled. That is the right order.

*The author is a deputy business and industrial news editor of JTBC.