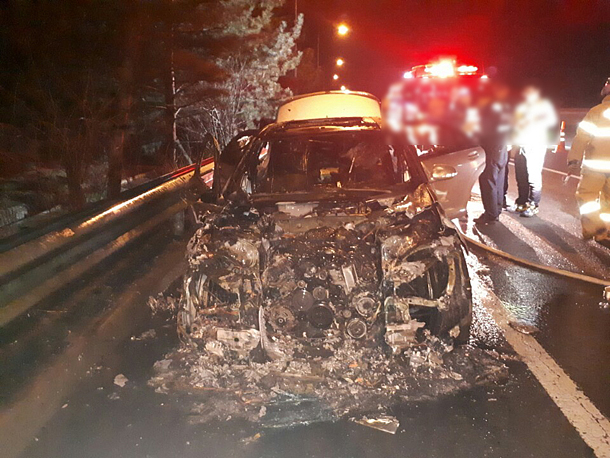 A Mercedes-Benz E-Class sedan caught fire Wednesday morning on the Namhae Expressway in Changwon, South Gyeongsang. The driver exited the car after noticing smoke coming out of the engine compartment. [YONHAP]

A Mercedes-Benz sedan burst into flames in the middle of a highway in Changwon, South Gyeongsang, Wednesday morning.

The incident occurred at 3 a.m. on the Namhae Expressway, according to local firefighters. A 51-year-old driver surnamed Kim pulled over his 2008 E-Class sedan when he noticed smoke coming out of the engine and quickly exited the vehicle. There were no casualties - other than 45 million won ($40,000) in reported damages.

The fire burned up half the vehicle’s body and was put out in 10 minutes. Firefighters suspect the car’s engine overheated but said they are still investigating the incident.

Mercedes-Benz recalled over a million vehicles worldwide in March after 51 reports of vehicles catching fire. The recalled cars included E-Class and C-Class models built between 2014 and 2017.

This isn’t the first time the import automaker’s cars have flamed up here. Last January, an S-Class large sedan caught fire in southern Seoul, and a Smart vehicle went up in flames in Mapo District, western Seoul, in April.

A spokesperson for Mercedes-Benz’s Korean unit said the car that burned up on Wednesday had yet to be reported to its service center but said the company would follow up with normal protocol when it is reported.