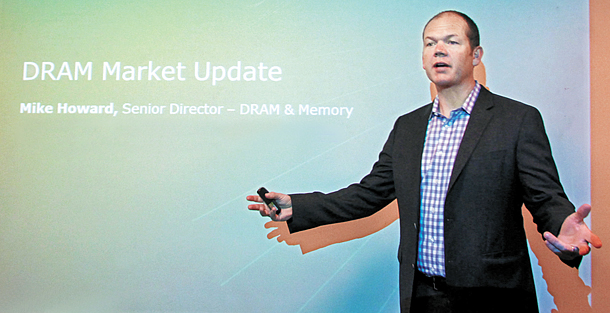 Mike Howard, a senior director at IHS Markit, presents on semiconductor market trends on Wednesday at the Korea Chamber of Commerce and Industry in Jung District, central Seoul. [IHS MARKIT]

Along with the three semiconductor manufacturers, Amazon, Apple and Google have been identified as possible bidders for Toshiba’s NAND business, but Walter Coon, director of NAND flash market research at IHS, said their chances of acquiring the Japanese unit are lower than established market players.

“I think it’s probably one of the existing suppliers,” he said at a semiconductor market briefing at the Korea Chamber of Commerce and Industry in Jung District, central Seoul, on Wednesday, “and each one has their own pros and cons as to why they make the most sense. I give those three companies fairly equal odds.”

According to Coon, Idaho-based Micron has a long history of acquisitions and experience, buying Toshiba’s commodity DRAM business 15 years ago, but “from a financial perspective, their balance sheet is not set out as well as SK Hynix,” he said. However, the Korean chipmaker lags in acquisition experience.

California-based Western Digital has a good chance of reaping the most out of the acquisition as it “has a very fruitful joint venture with Toshiba right now,” Coon said. However, it’s up in the air whether the company wants to assume full ownership of Toshiba’s fabrication facilities after already purchasing SanDisk last year.

IHS researchers were open to the possibility of unexpected dark horses. Silver Lake Partners, an American private equity firm that reportedly took part in preliminary bidding for Toshiba’s flash memory business, is one potential winner, according to Mike Howard, senior director at IHS.

“They do have competency in memory,” Howard said during Wednesday’s briefing. “That’s sort of one of the dark horses that would make sense.”

The chances are lower for global tech giants like Amazon, Apple and Google, according to Howard, because the acquisition could increase the companies’ costs.

Based on figures, Apple and Toshiba could be a good match since Toshiba accounts for about 18 percent of the NAND flash memory market and Apple consumes somewhere around that, but “the problem is there are just too many benefits to buying a commodity instead of making a commodity,” Howard said.

“Putting all your eggs in one basket is not something that Apple is normally wanting to do,” Coon said.

“Google or Amazon, they buy from everybody and push prices down aggressively,” Howard added.

The sale of Toshiba’s flash memory business could bring major upheaval in the world’s memory market regardless of the final buyer. Preliminary bidding ended on March 29, and around 10 companies reportedly participated. Toshiba is scheduled to open up main bidding this month after conducting separate negotiations with bidders and select a preferred bidder by June.

NAND flash memory is a nonvolatile computer storage medium that doesn’t require power to retain data. It has emerged as a cash cow for chipmakers in recent years for its competitive edge over its counterpart DRAM both in terms of function and cost.

NAND revenue grew for a third straight quarter during the fourth quarter last year, hitting a record $11.3 billion, according to data from IHS. The market is led by Samsung Electronics with a 36 percent share, followed by Toshiba with 17 percent and Western Digital with 16 percent. SK Hynix ranked fifth in the NAND market with 10 percent after Micron.