Where neighbors split a living room

Where neighbors split a living room 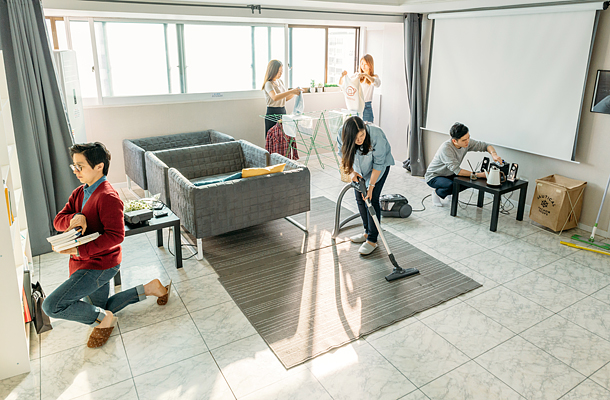 Residents of Woozoo’s homes share a bathroom and common space that includes a couch, terrace and kitchen area. [WOOZOO]

Kim Yeon-a, a working professional in her 20s, lives in a so-called share house with several other women her age in the hip neighborhood of Seongsu-dong, just north of the Han River in the eastern part of Seoul. She has her own bedroom but shares the bathroom and a common space, including a terrace and kitchen, with five other women.

She didn’t know any of them before applying to live in the house, but she says they have since become like family.

“I decided to move into the house because it had the location and price I was looking for,” Kim said. “My housemates feel the biggest selling point is the large space available. They also love the fact that living together relieves loneliness.”

Kim’s residence is one of 44 houses operated by Woozoo, a four-year-old start-up that runs share houses across the Seoul metropolitan area. Woozoo is the biggest of its kind in Korea, serving almost 300 residents, and there are dozens of companies like it, mostly start-ups and small enterprises.

The homes are reminiscent of college dorms where young people who don’t know each other can live communally. Woozoo’s homes are so popular that only one in four applicants get in, according to Lee So-hyeon, a spokeswoman for the company.

Prospective residents first file an application online and then visit the home for a brief interview with the location’s community manager, or Wooper as the company calls it, a portmanteau of Woozoo and helper. Kim herself is a Wooper and helps with vetting housemates, performing chores and mediating conflicts between residents. In return, the company gives her a department store gift card every month.

The share house is an emerging trend among millennials in Korea, replacing the traditional hasukjip, or boarding house, where residents, often university students and young working professionals in their 20s and 30s, live together in a house run by a landlord who lives with them.

In a share house, the live-in landlord is out of the picture, giving residents a greater level of independence.

“We can definitely see share houses getting popular at a rapid pace,” said Kim Moon-young, founder and CEO of Come & Stay, Korea’s largest portal site for share houses from different operators. “Last year saw a big leap in demand, but this year is going to be much bigger.”

Come & Stay lets prospective tenants search for homes by location, university, subway station and name of the operator. The company also runs its own share houses under the brand name Hamkke, which means “together” in Korean.

The popularity of share houses shows in the numbers. At the end of 2013, there were only 16 share houses registered on Come & Stay. By this March, there were 158 homes and more than 60 operators. The accumulated number of individuals who signed up to look for a share house grew eightfold from 392 last year to 3,223 in March. 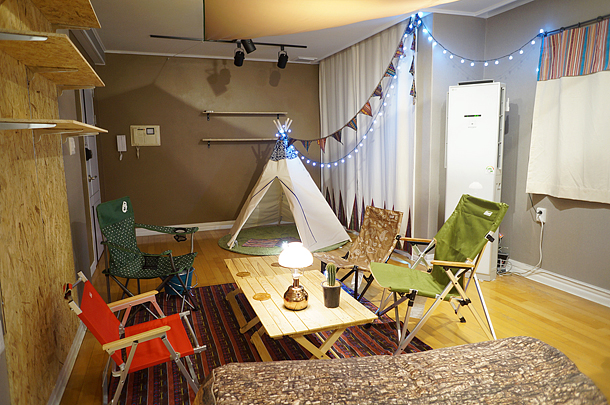 Each location has a different interior concept. The Hongdae location in western Seoul, has a camping-themed living room. [WOOZOO]

Of course, some sacrifices have to be made. There’s a certain degree of privacy lost by living in a communal space, and residents have to follow house rules. But there’s also much to gain. Share house residents can enjoy amenities that many young people just starting their careers can’t afford on their own, including furniture like large sofas, televisions and air-conditioners and, in some cases, house cleaning that’s built into the rent.

“Since a studio apartment accommodates both a bathroom and sink within a single space, there is no distinction between a residential space, inevitably preventing its inhabitant from feeling at home to the fullest,” said Kim of Come & Stay. “People also say they feel less lonely having housemates of a similar age, and women in particular feel safer and protected living in a shared space. Parents with daughters in college are increasingly knocking on our door.”

Share houses started springing up in Korea around 2012, when companies, mostly start-ups, began renting buildings and large-scale apartments and remodeling them to sublet rooms. They were hoping to tackle a chronic housing problem in the Seoul metropolitan area, where young people were complaining about high rent and poor living conditions. As a result, the government registered many of these companies as social enterprises and granted them subsidies for labor costs, insurance policy benefits, low-rate loans and tax exemptions.

Operators of the homes were inspired by their counterparts in Japan. One representative model is Hitsuji Real Estate, a realty website that started in 2005 and lists the largest number of share houses in Japan.

Lee Sang-wook, CEO of Urban Hybrid, a real estate development start-up in Korea, posits Japan was ahead of the curve because it had to deal with the aftereffects of a real estate bubble earlier than Korea did, during the country’s “Lost Decade” in the 1990s and early 2000s.

Lee started Urban Hybrid with five friends in October 2013 after seeing empty spaces around the city going unused. The idea was to raise their value by converting them to share houses.

Japanese companies, which started the phenomenon, have entered the Korean market as well. The local branch of Borderless, a Japanese share house operator, has been in Korea since late 2012. Its model is unique in that half of all residents must be from another country in hopes of fostering cultural exchange. Borderless runs 123 share houses across Japan, Korea and Taiwan, 26 of which are in Korea.

Although the market has largely been the realm of small companies, conglomerates with ample capital are eyeing its potential and buying up empty residential spaces to turn into share houses, albeit more luxurious ones.

The real estate development arm of Korea’s second-largest telecom operator, KT Estate, launched what it calls a “premium rent house” in Seoul and Busan. A mix of an officetel (a studio apartment in a mixed-use building) and a serviced apartment, the company’s Remark Vill includes high-end services and facilities like a fitness center, book cafe and housekeeping system that works on KT’s Internet of Things network. Its first location in Dongdaemun, central Seoul, opened last July, and its 797 rooms are now full.

“Whereas residents did not expect a lot from an officetel or studio except for the key function of lodging, we aim to transform the single life culture in a way that inhabitants can actually enjoy living in the communal space,” said a spokesman for KD Living, a contracted company responsible for managing Remark Vill.

Most share houses currently have an age limit of 35 years or younger, but operators predict they may need to raise that ceiling soon as people are living by themselves into middle age. The 2016 census showed individuals living alone totaled 5.2 million, making up 27.2 percent of the total population, compared to 20 percent just a decade ago. By 2022, their portion is projected to reach 30 percent.

Woozoo plans to raise the age ceiling and come up with different forms of share houses tailored to various demographic types, especially as high interest rates are making it harder for people of all ages to take out mortgages to buy their own home. For them, share houses may be the answer.

“Now that there are so many single people over the age of 35 and the generational gap isn’t that huge, we are considering accepting those as old as 40 and expanding further in the longer term,” Lee of Woozoo said.

Urban Hybrid, like KT Estate, plans to target the growing number of single people with high disposable income. “Reasonable pricing of course makes up a huge pillar of share house growth,” said Lee of Urban Hybrid. “But we believe another pillar of share house’s evolution will be directed at services for a quality lifestyle. We plan to include concierge service in some high-end residences.”

In similar vein, WeWork, an American company specializing in shared workspaces, last year moved into shared homes with WeLive apartments in New York. These residences offer perks more often found in hotels, like housekeeping, yoga classes and even free beer. Matthew Shampine, managing director at WeWork for Asia-Pacific said last month that the company has plans to bring WeLive service to Korea in the near future.

In some European countries with advanced levels of public welfare, there are even share houses for senior citizens. The Korean Housing Association, a private think tank, has been conducting research on these homes to gauge the potential of bringing this concept to Korea and serving its aging population.

“Housing currently available for senior citizens are confined to elderly welfare housing and congregate housing, which cater mostly to the limited demographic of those with ample personal property or the opposite,” said Yeom Hye-shil in a paper published through the association. “It is high time that various housing alternatives are studied for the older generation in the middle class to maintain a social network within a homelike atmosphere in their later years on an affordable budget.”

However, Kim of Come & Stay remains skeptical about the share house model for senior citizens. “There is a lot more to consider for the livelihood of the elderly - from dining to cleaning, laundry and even medical service - aside from leasing a communal space,” she said. “It would be more appropriate for the public sector to tackle the senior citizen housing issue under present social circumstances.”