A tale of finding love and loneliness : Hong Sang-soo and Kim Min-hee on the much-buzzed ‘On the Beach at Night Alone’

A tale of finding love and loneliness : Hong Sang-soo and Kim Min-hee on the much-buzzed ‘On the Beach at Night Alone’ 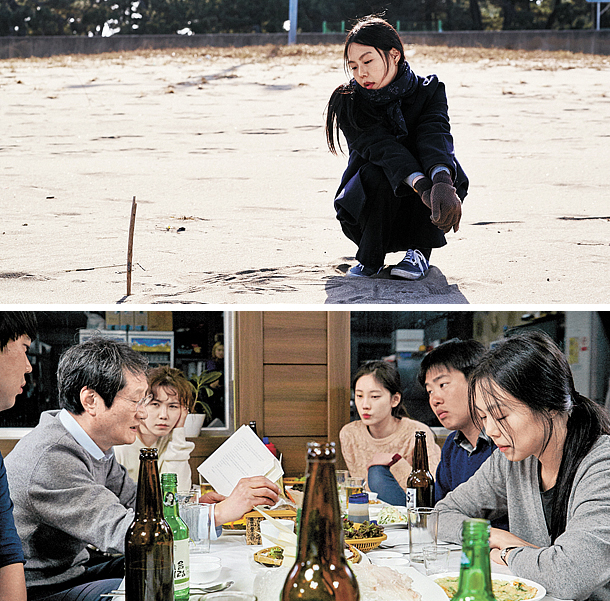 In Hong Sang-soo’s new film “On the Beach at Night Alone,” Actress Kim Min-hee plays the role of Young-hee, a celebrated actress in Korea, who flees to Germany when a love scandal with a married filmmaker Sang-won, played by Moon Sung-keun leaves her heartbroken. [CONTENTS PANDA]

Fifty seven-year-old filmmaker Hong Sang-soo’s new drama film “On the Beach at Night Alone,” revolving around a love scandal between a married filmmaker named Sang-won, played by Moon Sung-keun, and a young actress named Young-hee, played by Kim Min-hee, 34, has attracted about 40,000 viewers in Korea in just two weeks since its release. For her performance, Kim was named Best Actress at the 67th International Berlin Film Festival.

At a press conference for the movie held last month, the pair acknowledged their relationship, creating buzz over whether the movie is a depiction of the couple’s actual relationship. In an email interview with Magazine M, an affiliate of the Korea JoongAng Daily, Hong and Kim revealed their thoughts about the film and their feelings for each other.

Q. Unlike your previous works, you did not write the opening title yourself, and instead typed it with a computer. Is there a reason?

A. I tried to write it by hand, but just chose to do it like this. There is no reason for it. Maybe I felt this movie is too close to me, or maybe I felt it too overwhelming as the movie already has to do a lot with emotions.

The two parts of the film were shot by two different cinematographers - the first part was shot by Park Hong-yeol, and the second by Kim Hyung-koo. Why did you make this choice?

That’s because director Park could make it to Germany for the first part, and for the second part, I promised director Kim to do this movie together. I think the ambience of the movie was different between the two parts. We settle on an angle, but I think they added something extra. It is hard to describe. I think the difference comes more from the influence of two different settings than who shot it.

In your opinion, how is the character of Young-hee different or similar in the two parts?

I wouldn’t say similar because they are the same person. I think the viewers got to see the different sides of her in diverse situations.

Throughout the movie, a man in a black suit, played by Park Hong-yeol, plays the character who is always beside Young-hee. However, his identity is not thoroughly explained. Why did you put him in the movie?

When we were filming in a park in Hamburg, a man similar to him appeared, and that is why I put him in the movie. It felt right. I think it is unexplainable.

What is the reason you named the movie “On the Beach at Night Alone?” Also, when did you decide on the title?

That is the title of a poem by Walt Whitman. I was quite fond of the title, and thought this would be a good name for a movie. When I think about the title, I imagine a bleak, dark sea, with no artificial light, where there are no obstacles between me and the universe. I visualized a space where people can feel their true self - a world where there are no regulations, promises, recognition, or discerning good or evil.

In the movie, Young-hee is surrounded by people who look after her in hard times. This seems quite different from your recent films where female characters are portrayed as lonely, with barely any friends.

If you create a situation where a character goes through a hard time, it creates a space where relationships with good intentions can develop. I realized that honest help is possible. For instance, the character of Jun-hee, played by Song Seon-mi, can deeply relate to Young-hee’s pureness, delicacy and beauty. Young-hee is not the kind of person whose intentions people can easily read and if she has to live among people’s misunderstandings of her, I thought she might meet a friend like her.

The first part of the movie ends with the viewers wondering if Sang-won met up with Young-hee in Germany. In the second part of the movie, she meets Sang-won, but in her dreams. Why did you unite them in dreams?

I just couldn’t picture that scene in real life. Around that time, I had the book “About Love and Other Stories” by Anton Chekhov beside me, and I liked that book. I needed someone who could properly read out some lines from the book. As a result, I portrayed them in a dream. I especially liked the line that says that if that is really love, it should be moved by something more noble than a discernment of good from evil based on common ideas. If that is not the case, then you should not think anything. 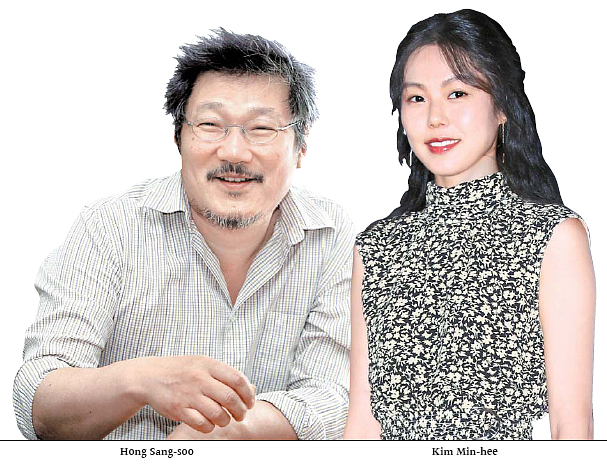 I think a lot of viewers will not see this movie as merely just a movie, but will also see how the movie overlaps with the real relationship between you and Kim. Some may believe every portrayal in the movie or want to confirm every statement.

You can interpret it like that, or just watch it as a movie. I think that kind of reaction is common for movies with many personal details. I did not intend on making it an autobiographical piece. I think the details and the intentions are what make the movie honest and personal.

Q. The character Young-hee is different in each of the two parts of the movie. Compared to the first part, Young-hee in the second part seems more calm and poised. Did you approach your character differently for each part?

A. The beginning of the second part starts showing Young-hee’s face as she is sitting in a movie theater in Korea. I think the scene where it captures Young-hee’s face when she is viewing a movie arouses many thoughts. It may seem like her dreams became reality or she is watching a movie about herself. Anyway, it seemed like while some of the emotions blended in the first part were still existent, there were also new feelings. I approached the role imagining Young-hee’s feelings in the time between the two parts of the movie.

In both parts of the movie, the beach in the winter is the only place that Young-hee feels alone. What did you feel when you were filming at the beach overseas and in Korea?

I like the beach. It feels magical, like I am looking at an unknown world. I feel purified when I stand in front of the vast beauty, and feel ashamed of the anxiety and the desire I had in my mind. I am thankful of the peace that a beach gives, and it reminds me of the true love I had in my heart.

When Young-hee is alone at the beach, she draws the face of Sang-won with a stick. Did you draw it yourself? Who do you think of it when drawing it?

That is the face of director Hong. When I was filming that scene, I did not know who would play the role of Sang-won. That’s why I pictured Hong’s face.

Among other characters from the movie, you and Jun-hee seemed to share a special bond with each other, especially the part when you give heartfelt condolences to her. Did you feel something special when working with Song?

She feels like a close friend. She is also tall, so I feel like a little girl when I am with her. Jun-hee plays a big part in Young-hee’s life.

Of all the scenes in the movie, which one is your favorite?

The scene when I am gently touching the cabbage, and also when I fall asleep on the beach in the cold winter - its the part where Young-hee’s true personality shows. I also like the ending; it is heartbreaking, showing Young-hee’s back as she is walking alone. However, with the appearance of birds in the background, it looks like they are keeping her company, and looks like there is a new spring sprouting in her heart.

The face Young-hee made when Sang-won was reading the line from Anton Chekhov’s book was very memorable. It seemed like I could see the tumult in her heart. How did you feel in that scene as an actress?

It felt like I stopped breathing. Those words had made me feel like the resentment and sadness were bursting out from my heart, but at the same time, like I couldn’t exhale even a small breathe. Those words felt so valuable to me that I never wanted to let go.

A lot of viewers will not see this movie as merely just a movie, but will also see how the movie overlaps with the real relationship between you and Hong. What do you think about this perspective?

I think Hong’s movies are always honest. The details in this movie might feel more personal, but he is the kind of person who thinks that making an autobiographical movie is impossible. I think it is right to deem this film as simply just a movie.