Freeman, Caine and Arkin on aging in Hollywood

Freeman, Caine and Arkin on aging in Hollywood 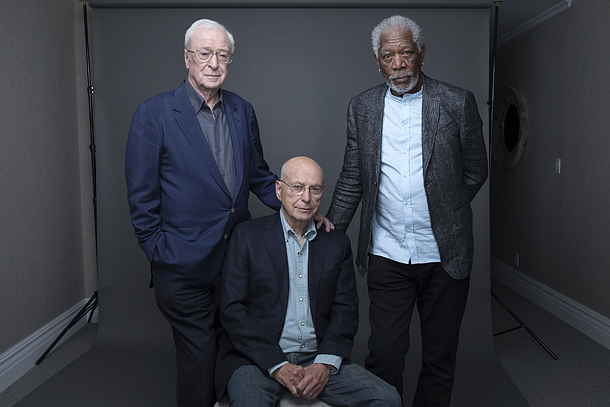 From left, actors Michael Caine, Alan Arkin and Morgan Freeman pose for a portrait to promote their new film “Going in Style” in New York. [AP/YONHAP]

One could hardly find a more formidable trio of such overwhelming character. Their voices, alone, are utterly unmistakable. Put together Arkin’s street-wise Brooklyn accent, Caine’s nasally Cockney cadence and Freeman’s deep Mississippi timbre and you’d have the most colorful radio play ever assembled.

Or you would have “Going With Style,” a new old-guy buddy-comedy that teams the contemporaries (Caine is 84, Arkin 83 and Freeman 79) for the first time. A remake of the 1979 comedy with George Burns, Art Carney and Lee Strasberg, the three play retired factory workers who, after having their pensions taken away, decide to rob a bank.

Freeman and Caine have made a few movies together (the “Dark Knight” films, “Now You See Me”) and are friendly. But as Caine points out, there are divisions. Freeman lives in Mississippi and Caine in London. “And he’s a golfer,” Caine says. “I can’t play golf. I was great friends with Sean Connery until he learned how to play golf on ‘Goldfinger.’ I never saw him again.”

So all the more reason to appreciate a rare assembly of three legends, who during a recent interview most enjoyed themselves by trading “Casablanca” lines. Of all the gin joints in the world...

Q. You seem to have had fun making this.

A. Caine: It’s one of the most enjoyable pictures I ever made.

Freeman: I’m reticent to say this but it’s the absolute truth: When you’re working with people whose work you venerate, it’s really almost always a very satisfying experience. Don’t tell everybody I said that.

So there weren’t any arguments over billing?

Arkin: You’ve got nothing to complain about!

Freeman: We wouldn’t. It’s agents who would do that. I don’t care.

Is this film, in a way, a vision of your own lives if you hadn’t found the movies?

Caine: When I became an actor, I was working in a butter factory, loading butter from the factory onto the trucks. If I’d have spent 60 years doing that, I’d have drunk myself to death.

Arkin: There was no choice for me. I had to act or kill myself, and I don’t think I killed myself.

You’ve each gotten better as actors with age. Morgan, you didn’t really start in movies until you were almost 40.

Freeman: People say always to me, “Your career didn’t get started until very late.” I say that’s probably propitious. When you start having success, particularly in movies and in a lot of places on stage, drugs start coming your way. I thought: Boy, if this had happened when I was younger, who knows? There were a lot of young guys who were just dead. What’s the reason for that? Too much too soon.

Caine: People say to me: “What’s the secret of your success?” I say timing, and it has nothing to do with me. It’s the way society changed in my own country. (Caine relates how he, of working-class origins, came to be cast by Cy Endfield as an officer in 1964’s “Zulu.”) No British director at that time, even if he was a left-wing communist, would have cast me as a posh-speaking officer. I owe my career to an American.

Do you think you’ve improved with age?

Freeman: When I was young, I did all kinds of different characterizations. I was a character actor. It was what I wanted to be. You can hide in character. You can go out there and just do it up. But for most parts they’ll say, “I want Michael Caine” or “I want Alan Arkin” and that’s what they want, not some character that he can play. They want him. And that starts getting in the way of being an actor. You become sort of a caricature of yourself.

Arkin: The first time I was asked to play something near myself I was terrified and I think I stank. It was not until relatively recently that that’s really all I want to do. When I look at “The Russians Are Coming,” I say I couldn’t do that now to save my life. I used to like to be anything in the world other than myself. But I’ve gotten relatively comfortable with being this, whatever this is. I don’t have the need to hide myself in order to express myself. Maybe it’s lazy but I like being this so I don’t really want to shed this.

Do you often get asked about why you don’t retire?

Freeman: Only on this because we play these old men.

Freeman: Have you seen (Arkin’s) wife? There was a little lady walking around here with a head full of gray hair. Gorgeous woman. So things like that are part of the equation. And the other one is activity, staying active.

Do you still enjoy acting as much as ever?

Arkin: I do it when people are having a good time, when they’re enjoying their work. If they’re changing the world, if their life is at stake, I want to run the other way as fast as humanly possible. I can’t handle that anymore. I remember that vividly. I feel badly for them, but I don’t want to participate in that.