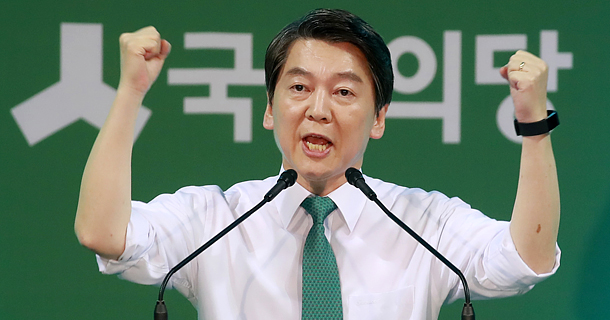 Rep. Ahn Cheol-soo delivers his acceptance speech at Chungmu Gymnasium in Daejeon on Tuesday after winning the People’s Party’s nomination for the May 9 presidential election. [YONHAP]

In his acceptance speech for the People’s Party presidential nomination Tuesday, Rep. Ahn Cheol-soo spoke of political principles in words that were almost identical to those of Barack Obama at the Democratic Convention in 2004.

Ahn’s message echoed Obama’s landmark address at the Democratic National Convention in Boston in 2004 at which John Kerry was named the party nominee for the presidential election in November that year. Standing on the podium, the-little known Senate candidate for Illinois with the exotic name delivered a powerful speech that garnered a national fame that allowed his bid for president four years later.

Park Sang-hoon, director of the Political Power Plant think tank and an expert in American politics, told the Korea JoongAng Daily that Ahn’s message in the speech “was straight from Obama’s 2004 speech,” though it “would be difficult” to prove plagiarism.

“Ahn clearly borrowed his words from Obama,” said the author of a number of books including “Discovery of Political Parties.”

But Park pointed out that in American political tradition, it is customary for politicians to issue briefs after giving speeches with footnotes citing works of other statesmen that they cited in their speeches.

“For instance, footnotes on Obama’s speeches would clarify from where Obama gained his ideas in the writing of his speech drafts. One footnote specified it was from a book that he checked out of the Columbia University Library. Another footnote stated it was from his lectures at the University of Chicago, where he taught the American Constitution. Obama and his campaign always clarified where his speech contents came from,” said the director.

Ahn did not acknowledge his use of Obama’s lines during in the speech or afterwards.

When asked about the issue by the Korea JoongAng Daily, Ahn’s campaign spokesperson Nemo Kim said the lines in Tuesday’s speech were “far from plagiarism.”

“The structure and contents [in Ahn’s speech] are totally different from Obama’s. It is hard to compare the two,” said Kim.

She admitted Obama is one of Ahn’s favorite politicians.

In what could have been the Ahn camp’s attempt to avoid questions about alleged plagiarism in his acceptance speech, the official English translation released by his camp Tuesday omitted many parts of the section that echoed Obama’s 2004 speech.

The translated English version merely states with some grammar errors: “This country doesn’t belong to progressives nor conservatives. It belongs to the people.”

The Ahn camp denied it deliberately attempted to omit the parts that allegedly lifted lines from the Obama speech 13 years ago. The spokesperson told the Korea JoongAng Daily that a staff member who was at the Daejeon primary on Tuesday was translating Ahn’s speech real-time on site “in noisy surroundings” to help reporters who didn’t make it to Daejeon.

Spokesperson Kim continued there are many other parts in the translated version that omitted parts of the original text, not just the one sounding identical to the 2004 DNC keynote address.

American political figures have had similar plagiarism problems. At the height of the presidential race last year, Melania Trump was hammered for a speech delivered at the Republican National Convention that lifted lines from Michelle Obama’s speech at the 2008 Democratic convention.

In her speech, Mrs. Trump said, “We want our children in this nation to know that the only limit to your achievements is the strength of your dreams and your willingness to work for them.”

Michelle Obama’s speech in 2008 had this line: “We want our children - and all children in this nation - to know that the only limit to the height of your achievements is the reach of your dreams and your willingness to work for them.”

Darren Yakey, assistant professor of English at Gachon University, says Ahn should have at least acknowledged he borrowed a construction from the former U.S. president.

“Paraphrasing is one thing but proper accreditation is important. He needs to acknowledge these are not his own words,” said the Canadian professor.

In the 2012 presidential election campaign, candidate Ahn was accused of plagiarism in a doctoral thesis submitted in 1991 by the then-ruling Saenuri Party. Among the charges was that he used parts of others’ work without proper attribution to earn a doctoral degree in medicine at Seoul National University (SNU). An SNU special panel cleared Ahn of any wrongdoing.