All eyes on Trump-Xi summit

All eyes on Trump-Xi summit 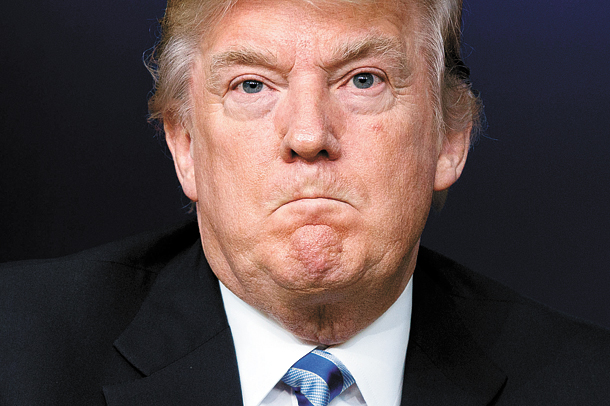 President Donald Trump listens to a question during a town hall with business leaders in the White House in Washington on Tuesday. [AP/YONHAP]

The White House declared that time has run out on the North Korea nuclear issue and “all options are on the table” ahead of a key summit between U.S. President Donald Trump and Chinese President Xi Jinping in Florida Thursday and Friday.

This assertion came as North Korea fired an intermediate-range ballistic missile toward the East Sea Wednesday morning just ahead of the first meeting between Trump and Xi at the Mar-a-Lago resort in Palm Beach, Florida, which is expected to be dominated by the issue of how to deal with Pyongyang and its threats.

“The clock has now run out and all options are on the table for us,” a senior White House official said on the condition of anonymity in a news conference Tuesday, which came just ahead of the missile launch.

“We would have loved to see North Korea join the community of nations,” said the official. He said that hadn’t happened “over different dialogues and offers over the course of four administrations.”

Claiming North Korea is a “matter of urgent interest” for President Trump and his administration, the official added that Trump “has been pretty clear in messaging how important it is for China to coordinate with the United States, and for China to begin exerting its considerable economic leverage to bring about a peaceful resolution to that problem.”

Such issues will come up in their discussions, the official said. “Even though we hear sometimes that China’s political influence may have diminished with North Korea, clearly its economic leverage has not,” pointing out that nearly 90 percent of Pyongyang’s external trade is with its closest ally Beijing.

The Trump administration has been suggesting a paradigm shift from previous U.S. governments on policy toward the North Korea issue, putting the Pyongyang nuclear issue as a top priority for the first time.

Trump’s administration also isn’t shy about the pressure it intends to put on China over North Korea.

In a town hall meeting with business CEOs on Tuesday, Trump said on his upcoming summit with Xi, “I’m sure we’re going to have a fantastic meeting and we’re going to talk about a lot of things, including, of course, North Korea,” which he described as “really a humanity problem.”

“China has great influence over North Korea,” Trump declared in an interview with the Financial Times on Sunday.

“China will either decide to help us with North Korea, or they won’t. And if they do that will be very good for China, and if they don’t it won’t be good for anyone.”

He also said that he will solve the North Korea issue if China won’t do it - and without China’s help.

The meeting between Trump, three months into office, and Xi, who will kick off his second term this fall, is anticipated to set the framework for Washington’s policy toward the North Korea nuclear issue.

“President Trump believes that former President Barack Obama, who also had the goal of resolving the North Korea issue through China, failed to see results because he was not aggressive enough,” one government source told the JoongAng Ilbo Tuesday. “President Obama left the North Korea nuclear issue to China as if he were outsourcing it, while Trump has a strategy of managing it directly as if it were a franchise.”

There is the possibility that the pressure Trump puts on Beijing over the North Korea nuclear issue may not live up to his rhetoric, as the president is known for an unpredictable nature.

He will have to deal with China on a series of related and unrelated issues including the need for Beijing to be stronger in its sanctions on North Korea; for it to end retaliatory measures against Seoul over the deployment of the U.S.-led Terminal High Altitude Area Defense (Thaad) antimissile system; as well as easing uneven trade between China and the United States.

Trump flipped on an earlier position that he may not adhere to the “One China” policy after appearing to take Taiwan’s side. He also has refrained from referring to levying heavy tariffs on Chinese products ahead of his meeting with Xi.

An op-ed piece in the Financial Times on Monday pointed out that Trump’s “firm words reflect the seriousness of the situation” and that “he must now back them with committed and sustained diplomacy.”

There is great interest in how President Xi deals with Trump. Xi’s second term as president will kick off this fall, so observers point out he may try to avoid direct collision with the United States.

“In order to alleviate President Trump’s attack, China may prepare some sort of present to please him,” pointed out Kim Sung-han, an international relations professor at Korea University.

Following Xi’s visit to the United States in 2015 for a summit with then President Barack Obama, China sealed a $38 billion deal with American aerospace giant Boeing to build 300 jetliners for Chinese airlines, among other contracts. Xi is known for making such large gestures on important state visits.

There’s even a possibility that North Korea could conduct a sixth nuclear test during Trump and Xi’s summit. Pyongyang fired an intermediate-range ballistic missile last February when Trump was meeting with Japanese Prime Minister Shinzo Abe in Mar-a-Lago.

Seoul also is eagerly watching the U.S.-China summit to see if it does anything to deal with the North Korean nuclear issue and Beijing’s retaliatory measures against South Korea over the Thaad deployment.

A bipartisan group of 26 U.S. senators Tuesday sent a letter to President Trump calling for Xi to end China’s “unwarranted and unfair economic retaliation against South Korea” for the deployment of the Thaad system.

The senators emphasized that the Thaad battery is a “defensive missile system critical to protecting the Korean people and, just as importantly, the tens of thousands of American troops and their families stationed in Northeast Asia from evolving North Korean capabilities.” They added the joint decision to deploy the Thaad “is entirely a result of North Korea’s continued aggressive behavior,” urging Trump to discuss with Xi “how China can play a more productive role in efforts to achieve the denuclearization of North Korea.”

The South Korean Ministry of Foreign Affairs in a statement said that the senators’ letter is “very meaningful” as it comes ahead of the summit and “urges President Trump to send a clear message to China” about its retaliatory measures against Seoul over Thaad.

“As this is the first U.S.-China leaders’ summit since the launch of the Trump administration, we view it as an important opportunity toward resolving the North Korea nuclear issue,” said Cho June-hyuck, the spokesman of the South Korean Ministry of Foreign Affairs, on Tuesday.

Referring to Trump’s and U.S. Ambassador to the United Nations Nikki Haley’s recent remarks, he added the Trump administration “is clearly showing it is putting resolving the North Korea nuclear issue as top priority.”

“If Pyongyang conducts a nuclear test around the time of the summit, it may raise its own strategic standing for its nuclear program,” said Koh Yoo-hwan, a North Korean studies professor at Dongguk University. “However it will lead to strengthening of sanctions against North Korea and a pretext for Washington’s talk of a preemptive strike - and drive it to collapse.”