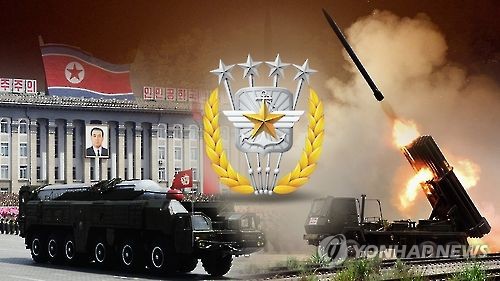 North Korea fired a ballistic missile off its eastern coast Wednesday morning that flew about 60 kilometers (37 miles) before splashing into the East Sea, according to South Korea’s Joint Chiefs of Staff (JCS).

The projectile was launched from the eastern port city of Sinpo in South Hamgyong Province at around 6:42 a.m., said the JCS. The type of missile was undisclosed. Authorities in Seoul and Washington are analyzing the test.

The U.S. Pacific Command said in a statement, “Initial assessments indicate that the type of missile was a KN-15 medium-range ballistic missile.” It said that the missile did not pose a threat to the U.S.

The Blue House convened a National Security Council meeting at 8:30 a.m. and said it would “maintain military readiness.”

The Trump administration said Pyongyang’s nuclear program would be a top agenda item for the talks, though it is unclear just how far Beijing, the North’s closest ally, was actually willing to go to reign in its communist partner.

Trump said in an interview with the Financial Times Sunday, “If China is not going to solve North Korea, we will.”

On March 6, in the second test, the North test-fired four Scud-ER missiles off its eastern coast, three of which fell into waters within Japan’s exclusive economic zone; they all reached an altitude of about 260 kilometers and flew 1,000 kilometers.

The possibility of a sixth nuclear test by North Korea has been looming for weeks. North Korean leader Kim Jong-un said in a New Year’s speech on Jan. 1 that the country was in its “final stage” of preparing to test-fire an intercontinental ballistic missile that could reach the U.S. mainland, the first of its kind.