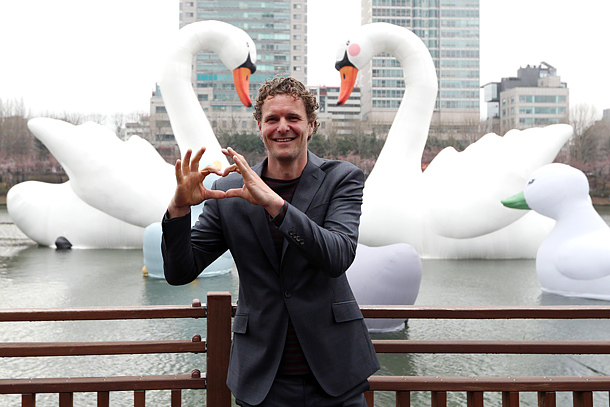 Dutch artist Florentijn Hofman poses in front of his giant inflatable sculptures titled “Sweet Swans” on Thursday. The sculptures will be floating on Seokchon Lake near Lotte World Tower in eastern Seoul until May 8. [YONHAP]

Now on Seokchon Lake near the newly-opened Lotte World Tower in eastern Seoul is floating a family of giant swans - a couple about to gently meet and five cygnets - or young swans - around them.

The swans are inflatable sculptures created by Dutch artist Florentijn Hofman who caused a sensation in Seoul in 2014 by installing a giant yellow rubber duck on the same lake as part of his series of temporary public art project.

“This ‘Sweet Swans’ project is about the sweet moments of spring and love,” the artist told reporters at Lotte World Tower on Thursday. “The swan family is a visualization of love, which, like the air, surrounds us but we often forget about.”