Taec-yeon explores his more serious side : The singer is on a search to find the perfect role to cement his acting career

Taec-yeon explores his more serious side : The singer is on a search to find the perfect role to cement his acting career 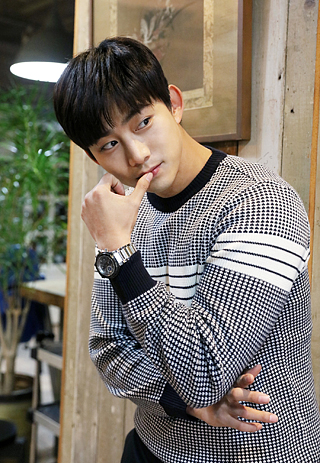 Boy band 2PM’s Ok Taec-yeon is known for his fun-loving personality. But, he shows a new side of himself in his second movie “House of the Disappeared,” which recently hit theaters.

This his second movie after his role in 2013’s “Marriage Blue.” The actor, who has previously starred as the leading man on television dramas, takes a step back in a supporting, yet significant role in the film.

Co-star Kim Yun-jin praised Ok, saying, “It wouldn’t have been an easy decision to play a smaller role having played lead roles in dramas.” The movie follows Mi-hee, played by Kim, who is released after 25 years in prison. Ok plays Priest Choi, who aids Kim in the process.

Below is an excerpt from an interview Ok had with Ilgan Sports, an affiliate of the Korea JoongAng Daily.

Q. How do you feel about the film?

A. I thought, “how did I even shoot this part?” when I saw some scenes. I also felt some regret as well. I guess that, because it’s my movie, I can’t look at it objectively. I can’t help but feel regret with some of my acting.

How did you play the role of Priest Choi?

The final product is different from what was initially planned for Priest Choi. Initially the character was darker and scarier, but I tried to make him lighter when he meets Mi-hee. It was difficult to actually be the character when visiting her house, because if I was too light I would look like a salesperson and if I was too dark Mi-hee would have no reason to open the doors.

I tried to find the mid-point in the tone of the dialogue and the personality of the character. The character might be wearing a robe, but his actual role is more like an investigator looking into the story. That’s why I talked a lot with the director.

You are an easy-going person, but played a serious role. How was that?

When we are filming I get into the role quickly and as soon as the filming ends I get out of character quickly as well. Because of my personality, I heard that the director was worried if I was suitable to play the role of Priest Choi. It is indeed hard to play a serious role when my real personality is completely different.

How does it feel knowing that this was your last movie before joining the military?

I’m actually pleased that this movie is my last before enlisting in the military. It’s my second movie, so I hope there is no sophomore jinx. To me, it’s not a movie to cement my status as an actor, but more of a step forwards as an actor.

What worries do you have as an actor?

Will I be able to find the perfect character? I think that’s about it. I constantly think about what character I should play in order for people to accept me as an accomplished actor. I want to show them that I am an actor with a lot of potential.

You are turning thirty this year. Any goals or plans?

Being relaxed is my goal. I really rushed through my 20s without looking around me. I gave up a lot of things to become a singer [as a member of boy band 2PM]. That’s why I have recently been going on package tours.

I still have no experience going on blind dates or being a part of a campus couple. I want to find and enjoy the finer things in life, and eventually live a more relaxed lifestyle.