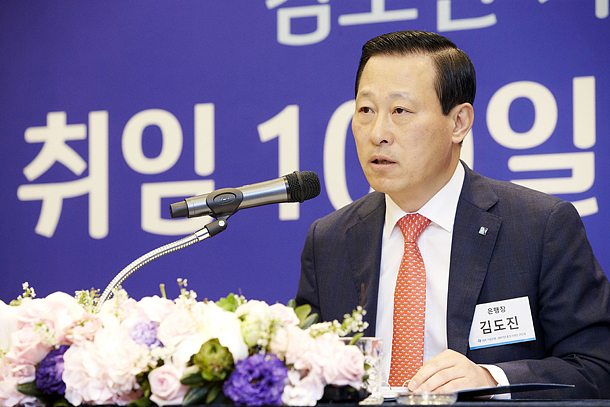 Industrial Bank of Korea CEO Kim Do-jin speaks to the media at the headquarters of the Korea Federation of Banks in central Seoul on Thursday. [INDUSTRIAL BANK OF KOREA]

The Industrial Bank of Korea, a state-owned bank that provides loans to small and midsize companies, is eyeing mergers and acquisitions in Indonesia as part of its global expansion strategy.

“We’ve asked our strategic partners there to come up with a list of local banks that focus on corporate financing and foreign exchange,” Kim Do-jin, chairman and CEO of the Industrial Bank of Korea, said Thursday.

Over 1,000 Korean companies operate in Indonesia, making it a ripe market. The bank is also looking to expand in Vietnam and Cambodia.

In Cambodia, the bank wants to foster stronger cooperation with its local affiliates like IBK Capital.

Kim made the announcement during a press conference to mark his 100th day at the helm of the organization. When he was inaugurated in December, Kim vowed to diversify the bank’s portfolio and strengthen its global presence, setting a bold target for the bank’s overseas business at 20 percent.

His announcement came during the same week that Korea’s first internet-only bank, K bank, was launched. Asked how he felt about the newcomer that has vowed to disrupt the local financial industry, Kim said he was “frightened” but hesitant to label it an immediate threat to existing commercial banks.

“It will take six months to one year to assess the accurate status of internet banks,” Kim said.

Kim did note that he believed the major victim of the internet bank’s market entry would be savings banks, which in Korea are more like consumer finance companies that cater to bad-credit borrowers. K bank has said it will offer loans at competitive rates to borrowers with middling credit.

In its role, the Industrial Bank of Korea CEO vowed to continue expanding loans for small and medium-sized companies even if economic conditions remain unfavorable.