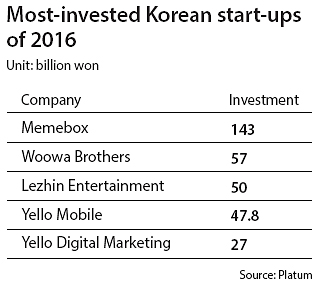 Yello Mobile and its marketing subsidiary Yello Digital Marketing ranked fourth and fifth with investments worth 47.8 billion and 27 billion won each. The company’s Coocha enables consumers to see all products in Korea’s major e-commerce sites organized in a single platform. Pikicast, its popular web content publisher, is similar to the U.S.’s BuzzFeed.

The ranking was slightly different for the total amount received between 2014 and 2016: Yello Mobile was No. 1 at 217.7 billion won, Memebox second at 176 billion won and Woowa Brothers third at 109 billion won. Platum first started collecting data for the report in 2014.

By industry, ICT (information and communication technology) services attracted the most investors and funding. A total of 173 start-ups in the list were engaged in the sector, taking up 55 percent of the list of 313 companies. This sector also received the biggest amount of investments, worth 451.6 billion won. But in terms of year-on-year growth rate of investment volume, the retail and services sector posted the sharpest uplift thanks to Memebox, jumping threefold from 2015 to 222.4 billion won this year.

Last year, 249 investing companies offered funding to Korean start-ups, among which 80 percent were Korean and 20 percent from overseas, mainly from the U.S., Japan and China. Among 43 foreign investors, half were from the U.S. while Japan and China both accounted for about 25 percent.