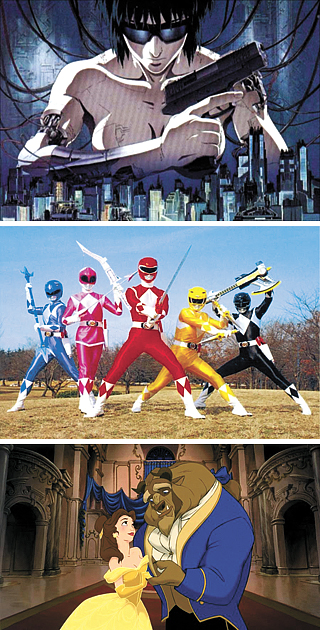 Popular stories that mesmerized audiences in the ’90s are being recreated with modern taste. “Ghost in the Shell” (1995), “Mighty Morphin Power Rangers” (1995) and “Beauty and the Beast” (1991). [DSTATION, 20th CENTURY FOX, WALT DISNEY PICTURES]

A number of films have been stirring up nostalgia in the hearts of moviegoers over the last few weeks, becoming unbeatable box office hits.

A reboot of the iconic King Kong franchise “Kong: Skull Island” debuted at number one at the Korean box office when it was released on March 8, and remained in the top spot for longer than a week. The film has sold 1.7 million tickets so far.

Similarly, Disney’s live-action remake of “Beauty and the Beast” dominated the box office for weeks, beating out star-studded new releases.

Directed by Bill Condon and starring Emma Watson as Belle and Dan Stevens as the enchanted Beast who can only turn back into a human by finding his true love, the film has not missed the top spot of the weekend box office since its release on March 16.

Despite reviews that pointed out that there is almost no difference between the original 1991 animated film and the live-action remake, moviegoers are still flocking to theaters to catch the new version of the beloved tale, regardless of whether it is satisfying or disappointing.

A scan of reviews online revealed a range of opinions of the film.

“As an avid fan of the original animation, I loved the latest live-action film. Since it is almost the same as the original, seeing the story unfold live gave me thrills,” wrote one commenter. 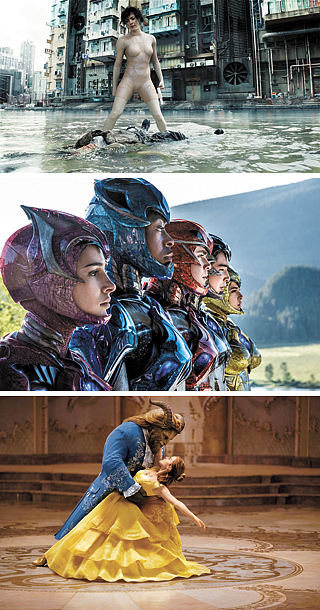 From top to bottom, the modern version of “Ghost in the Shell,” “Power Rangers” and “Beauty and the Beast.” [LOTTE ENTERTAINMENT, NEXT ENTERTAINMENT WORLD, WALT DISNEY COMPANY KOREA]

Another comment, in contrast, read, “I was so disappointed after seeing the remake, so I ended up watching the original animation again for three consecutive days.”

Perfectly being aware of the conclusion and how the plot will unfold does not seem to bother the classic animated movie’s fans, as “Beauty” has sold more than four million tickets since it hit theaters to become the highest-grossing foreign film to be released in Korea this year.

The musical romance is also being well-received internationally, having raked in nearly $400 million in the United States and $876.3 million globally as of Monday.

“Ghost in the Shell,” released on March 29, is another movie that brought a ’90s classic to the big screen.

The remake of the 1995 Japanese animation, which was based on a 1989 manga, the science-fiction film helmed by Rupert Sanders and starring Hollywood big names like Scarlett Johansson and Juliette Binoche debuted at third in its first weekend in Korea.

The movie, which revolves around cyborg field commander The Major (Johansson) who has been cyber-enhanced to become the perfect soldier devoted to stopping the world’s dangerous criminals, has so far earned 4.71 billion won ($4.21 million) as of Monday.

Amid rising criticism for focusing too much on visuals instead of following the philosophy of the original story, the movie debuted in third in the United States last weekend, opening with $19 million in ticket sales.

Though its performance seems quite poor compared to its $110 million production cost, the dystopian science-fiction action flick is expected to find more eager moviegoers internationally in the coming weeks thanks to the story’s solid fan base.

The trend of attracting moviegoers with nostalgia will continue with a list of classic remakes and reboots slated for release in the upcoming weeks.

The animated “Smurfs: The Lost Village,” starring the popular characters from Belgium that were first introduced in 1958 and made into a TV series in the 1980s, is scheduled for release on April 28.

Also attracting attention is the upcoming “Power Rangers.” The newest film in the franchise, which aired on TV in the ’90s and was made into feature films in 1995 and 1997, is also slated to hit theaters on April 20.

“Children who grew up watching classic movies have reached their 40s and 50s. And remakes of those classics can peak their interests and create buzz among the younger audience, appealing to a larger group of moviegoers,” film critic Oh Dong-jin said.

Oh added, “The confidence in technological developments that made it possible to turn popular animated films into live-action is another motivation behind the remakes. As can be evidenced by the animation-based ‘Beauty and the Beast’ and ‘Ghost in the Shell,’ putting animation into live-action gives a sense of new feelings to the story that people are already aware of.”