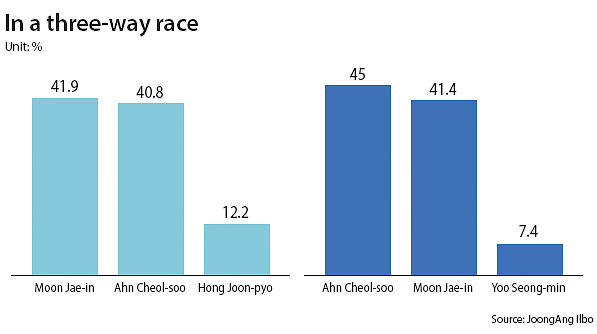 With Ahn Cheol-soo, the presidential nominee of the People’s Party, rising fast in the polls, the May 9 election is shaping up as a neck-and-neck contest between Ahn and Democratic Party nominee Moon Jae-in.

In a poll by the JoongAng Ilbo, Moon led Ahn in a six-way race - including the candidates from five major political parties and one independent - 38.4 to 34.9 percent.

Kim Chong-in, the former DP interim chief who declared an independent bid on Wednesday, came last with a scant 1.7 percent.

The JoongAng poll was conducted on Tuesday and Wednesday on 1,500 adults nationwide with a margin of error of plus or minus 2.5 percentage points.

And in a two-way race, Ahn comfortably led Moon 50.7 to 42.7 percent, the largest gap Ahn has achieved so far over Moon in the polls.

But such a two-way race is considered far-fetched. It assumes the two conservative party candidates would drop their bids and support Ahn for the sake of defeating Moon.

In a JoongAng poll conducted on March 18 and 19, Ahn was behind Moon by more than 20 percentage points, 34.7 to 13 percent. And there is one major difference between the March poll and the latest one.

In the March poll, South Chungcheong Governor An Hee-jung and Seongnam Mayor Lee Jae-myung were included, with An taking 21 percent and Lee 8.1 percent. But the two are now out of the race after primary defeats to Moon.

A sizeable chunk of their supporters have rallied to Ahn rather than Moon, resulting in a 21.9 percent increase in numbers over a two-week period.

After the exodus of An’s supporters to the People’s Party nominee, the term “Ahnexit” was coined to describe the trend.

A Moon camp insider told the JoongAng Ilbo such an exodus was hardly a surprise to them.

“Given that Governor An’s former supporters are not traditional DP members, we anticipated a large chunk would move across the party line [to Ahn’s side],” said a campaign staffer as quoted by the JoongAng Ilbo.

As for conservative voters throwing support to Ahn, political observers note they are making a strategic choice as LKP nominee Hong has little chance of winning the election.

To them, Ahn is a better choice as his views are considered to be moderate compared to Moon’s progressive principles.