Woo attends third round of questioning

Woo attends third round of questioning 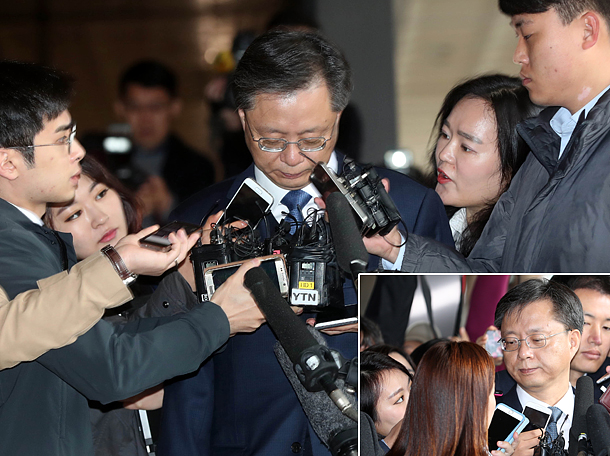 Woo Byung-woo, former senior presidential secretary for civil affairs, appears at the Seoul Central District Prosecutors’ Office on Thursday. It was the third time prosecutors summoned Woo for questioning. This time, Woo lowered his head while reporters barraged him with questions. In a previous summons (inset in bottom right), Woo stared fixedly at a reporter who asked him questions. [KANG JUNG-HYUN]

Woo Byung-woo, once a powerful member of the presidential team of Park Geun-hye, was called in for questioning by prosecutors Thursday for his abuse of power, negligence and obstruction of justice charges.

Woo, infamous for his arrogant and highhanded attitude before the press, was surprisingly low-key as he addressed reporters before entering chambers around 9:55 a.m., hinting at a possibility that he would face a more severe treatment in this interrogation. It was his third round of questioning by investigators since the scandal surrounding the former president and her secret inner circle erupted last year. His nonchalant manner in the two previous sessions infuriated the public.

After stepping out of a car at the Seoul Central District Prosecutors’ Office, Woo lowered his head to bow to a prosecutorial staff member several times. He stood at a line of photographers and responded to the media as if he had something to say to the public. “I am heartbroken and wretched about [what happened to] the president,” he said.

Park was impeached in December and permanently removed from office by the Constitutional Court last month for allowing her secret inner circle to influence state affairs for private gain. In addition to corruption and abuse of power suspicions, Woo was accused of turning a blind eye to the clout Park gave her friend Choi Soon-sil in state affairs.

Suspicions were also raised that Woo meddled in appointments and in the dismissals of officials. He was also accused of interfering in the prosecution’s probe in 2014 into the Coast Guard’s failed rescue operation during the Sewol ferry sinking.

Asked about the charges, Woo said, “I will answer everything faithfully to the prosecution.” Asked if he still maintains the position that he does not know Choi, Woo said, “yes.”

Speculations grew that Woo is being prepared for his detention. While many powerful figures involved in the scandal, including Park, Choi and Samsung Electronics Vice Chairman Lee Jae-yong, have been detained for investigation and prosecution, Woo, a former senior prosecutor, has remained free. The independent counsel’s attempt to seek a detention warrant for Woo was rejected in February.

“The investigation this time will be intense, and the prosecution will likely apply for a warrant to take him into custody,” a senior prosecutor told the JoongAng Ilbo. “That is why he has changed to a low-key attitude.”

Public skepticism is high about the prosecution’s will to go after Woo, as he was cleared after a probe into corruption allegations involving him and his family in November. At the time, a photo, taken and published by the Chosun Ilbo, showed that Woo was seen smugly folding his arms while two prosecutors stood across from him looking deferential. The photo sparked an immediate internet meme: “Questioning for the King.”

Prosecution sources said they won’t go easy on him. In addition to eight charges by the independent counsel, the prosecution so far uncovered additional charges, they said.

The timing is also sensitive, because the prosecution is seeking to restore its plummeted reputation as presidential candidates will likely pledge various reforms.

Public distrust of the prosecution reached a new peak as the Park scandal involved former members of the elite organization such as Woo and former chief of staff Kim Ki-choon. Presidential contenders are making pledges one after another that they will redistribute the unnecessarily strong power of the prosecution and introduce a new investigative body for senior public servants.