Moon must be more

Moon must be more 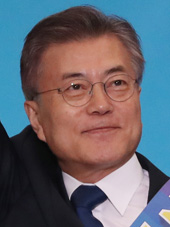 The gust of Ahn Cheol-soo is powerful. His approval rating is skyrocketing in the Busan, South Gyeongsang and Chungcheong regions day by day. In Chungcheong, supporters of An Hee-jung turned to support him, and even in Busan and South Gyeongsang, the stronghold of Moon Jae-in, he is gaining strength to match the popularity of Moon. It’s painful for Moon.

In Jeolla region and among voters in their 20s, Ahn’s popularity is strong. Moon managed to score 48 percent in the 2012 presidential election because over 90 percent of Jeolla voters supported him, adding 6 million votes. But in the upcoming election, over 3 million votes from Jeolla will go to Ahn. If he loses not only Busan and South Gyeongsang but also Jeolla, Moon will not have an easy race.

Moon will not stay quiet. He is about to use three cards to turn the situation around. First will be stopping the candidate merger between Ahn and Hong Joon-pyo by prompting the idea that an alliance with the obsolete, conservative force must not be allowed. But that will actually support Hong and Moon’s plan may derail. He will also be labeled a coward who wants to avoid a two-way race against Ahn by using Hong as a shield. It is also skeptical if Hong’s single-digit rating will actually be a shield for Moon. 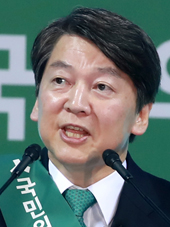 The second option will be repeating the surprise recruitment, strength of Moon. It is a familiar event to demonstrate his ability to expand the spectrum by recruiting conservative high-profile figures. But it will no longer work. Including Kim Chong-in, all the recruits left the party. Moon’s ideology hasn’t changed, either, so voters see it as nothing more than a show.

The third card will be a number. He will argue that Ahn’s party only has 40 seats in the National Assembly and Ahn won’t be able to do anything even if he wins the presidency. He will argue that the Democratic Party, the largest group in the legislature with 120 seats, only deserves to run the country. But that is nothing more than wordplay.

During the Park Geun-hye presidency, the Saenuri Party had more than 150 seats, but it achieved nothing. When the ruling party prevails, the opposition parties unite to block all the bills. That is the reality of our politics. An Hee-jung was worried about the practice and prompted the idea of a grand coalition, but Moon shut it down. If he wins, Moon won’t be able to do anything with the 120 lawmakers in his party. If Ahn Cheol-soo wins, he may be able to achieve far more. Because he has to form a coalition, he will be able to give and take to accomplish goals.

The people are now smarter than politicians. Old political engineering will only repulse voters. Moon must spend some time alone to look back on himself. What made him want Hong, a remainder from Park’s party, not to quit the race in the middle? Perhaps it is because he is used to living an easy life by using the hostile symbiotic relationship between the ultra-leftists and ultra-rightists, so he probably wanted to shape the race into a competition between pro-Moon and pro-Park groups.

In the past, such a strategy probably worked, but not now. The people loath the deeply-rooted evil practices of Park loyalists and they do not want another, similar group to win the presidency. In last year’s general election, Ahn’s People’s Party scored a victory and that is the proof. Moon, in his acceptance speech for the nomination, promoted the idea of unity. He, however, immediately added that the upcoming presidential election is a battle between justice and injustice, clearly repeating his practice of instigating a split.

It is true that Park committed an injustice by allowing her secret inner circle to influence state affairs for private gains. But that does not make Moon just. The people punished Park’s injustice with impeachment and they are now seeking a successor with character and ability. Moon is just one of the candidates. If the voters are asking for policies, he will fail by arguing for justice. If he truly wants to score votes by prompting justice, he must give a clear explanation about the alleged special treatment for his son’s employment and the suspicion that he had covered up the drunk driving accident of an in-law of then President Roh Moo-hyun when he was working as civil affairs senior secretary for him.

In the past, Moon was respected by the people for his humble and engaging behavior. He must go back to his original self. There is no need to tell him to compete with policy pledges. He must prove with his actions that he has a vision to lead the country with cooperative politics, not with hegemonic control.