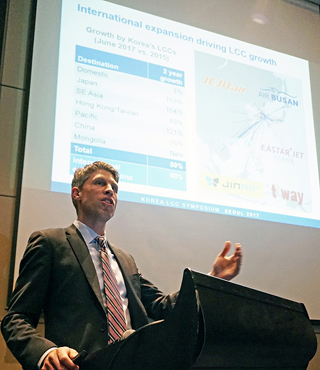 The average growth rate of Korean low-cost carriers in the last six years was 20 percent and a similar growth rate is expected to continue for some time thanks to consumer demand in Korea and Southeast Asia, according to a Boeing forecast.

Darren Hulst, Boeing’s managing director for Northeast Asia marketing, said at a conference on Friday that the growth of low-cost carriers in Korea drove up passenger traffic. The average growth rate of traffic was 9 percent between 2013 and 2016, compared to an average 3 percent growth between 2006 and 2012. Low-cost carriers took up a third of all passenger seats last year in Korea.

While LCCs annually grew 20 percent on average in terms of passenger capacity in the last six years, full-size carriers posted an average growth rate of merely 2 percent during the same period.

“In the recent two-year period especially, the key driver of this growth [in Korea] has been LCCs expanding internationally,” he said. In fact, the capacity growth of Korean LCCs in the domestic market grew merely 3 percent in the last two years, whereas the capacity growth in Japan and Southeast Asia each jumped 153 percent and 154 percent each.

Passenger capacity to China shrank by 16 percent. However, Hulst was optimistic that frozen relations between China and Korea were a short-term challenge that would gradually improve.

“The issue with traffic access and demand between Korea and China hopefully is something that becomes an opportunity because of the massive demand potential in the Chinese market,” said Hulst.

He added that China has much potential demand for outbound flights, with its economy and middle-class still growing.

Another challenge is the airspace regulations between Japan, Korea and China, which would gradually ease in the long term and result in “significant stimulation and tremendous long-term growth similar to what can be seen [recently] between China and Japan.”

Asia is already the fastest growing continent for low-cost carriers. This year, its growth of seats sold was 22 percent compared to ten years ago, higher than the 3 percent in the U.S. and Europe’s 12 percent. Its market share in the global LCC market is 33 percent while the U.S. and Europe is at 26 and 29 percent each.

“The fact that we’ve seen more than double the LCC capacity in two years to Japan and Southeast Asia illustrates the fact that there is tremendous amount of growth still for low-cost carriers,” said Hulst.

He added that there are new destinations to connect to and that enhanced airplane capability along with new demand will fuel the LCC market to expand for another few years.