In the cockpit of an Asiana Air simulator

In the cockpit of an Asiana Air simulator 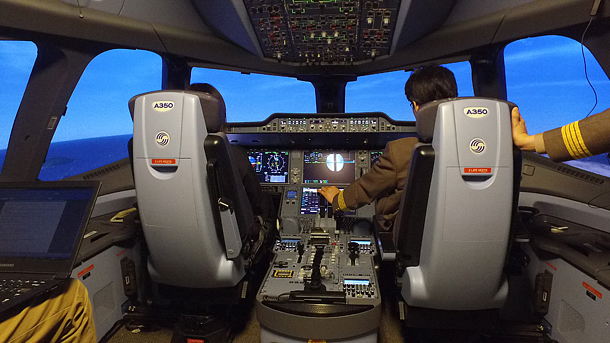 An Asiana pilot demonstrates the operation of the A350 flight simulator on March 28 at its headquarters near Gimpo International Airport. [CHOI JAE-SEON]

An Asiana Airlines A350-900 aircraft departed from Los Angeles International Airport for Santa Monica at 9:30 a.m. on March 28. The pilots were upbeat about the fine weather ahead, until the plane suddenly started to shake after a bird hit the engine during takeoff.

A warning light came on and the captain shouted, “It’s a bird strike!”

Tension struck the cockpit as the crew was reminded of the 2009 incident when a US Airways pilot landed an airplane on the Hudson River after losing both engines in a bird strike.

The captain started to reduce engine thrust to cut fuel and air to the engines,in an attempt to avoid an engine fire. Yellow warning signs showed one engine was down due to severe damage from the bird. The captain was left to decide whether to fly back to the airport of departure or land elsewhere. 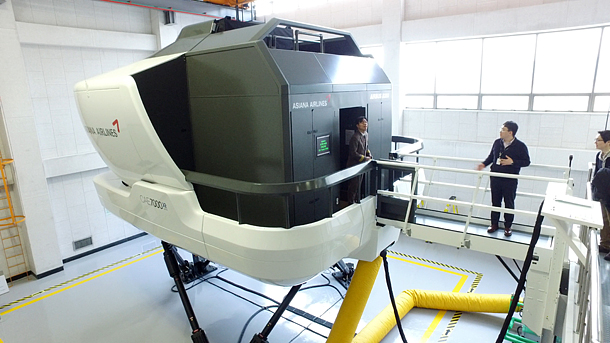 The exterior of the A350 flight simulator. [JEONG JIN-SUNG]

When the Korea JoongAng Daily visited the Asiana headquarters near Gimpo International Airport for an exclusive ride on the company’s new A350 flight simulator on March 28, there was nothing but a sigh of relief after the tense flight. The cockpit inside the simulator was strikingly realistic, with detailed views of the landscape over Los Angeles with the beach of Santa Monica appearing on the front screen. Shaking and the sound of engines added to the tension.

“US Airways was unlucky because they lost both engines, which means the plane had no power to stay aloft,” said Capt. Hwang Nam-sik, the pilot for Asiana. “Not all bird strikes result in severe engine damage, but our pilots are aware of the possibility so we to through heavy training on the simulator.”

Preparing to bring in four new A350-900 planes to its lineup within the year, the air carrier installed a 20 billion won ($17.6 million) simulator last month for safety training. 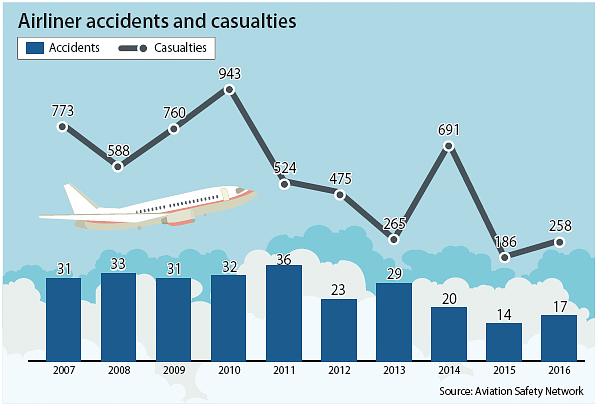 Asiana is the first Korean carrier to adopt the newest A350-900 planes. It is not easy on the budget, but “it’s still worth the cost since the machine provides about 98 percent synchronized experience compared to real-life trials,” Hwang said.

Simulators are cockpit mock-ups made to train pilots. The machines also appear in the movie “Sully” to test whether Captain Sullenberger made the right choice to land the plane on the water rather than taking it back to LaGuardia Airport in Queens.

Weather conditions like wind speed, the position of the plane when it met a flock of Canada geese, and the time from engine loss to actual landing were all programmed into the simulator to reproduce the bird strike.

“The simulator helps us train for more than 400 unexpected and dangerous situations like in the movie ‘Sully’,” said Hwang. “Pilots train about three to five months on the ground including training in a simulator for different planes before they can take them into the air.”

Each scenario consists of a specific time of the day, weather conditions,the location of departure and arrival and obstacles like the bird strike.

When Hwang programmed in a thick fog ahead the plane alerted captains, “Weather ahead! Weather ahead!” The plane started shaking due to an abrupt shift in the air current in the cloud. “This is when we signal passengers to fasten seat belts,” Hwang said. Inside the cloud, pilots lost the front view and had to depend wholly on two computer screens in front of the cockpit which displayed the plane’s position and speed.

Among simulators, the one feature specific to the new A350 simulator was the smoke generator which filled up the cockpit.

When programmed, smoke quickly filled the simulator, making it hard to see. The smoke had a realistic smell, but it is not harmful to humans, Asiana said.

“Such a situation calls for an emergency landing. The smoke adds to the sense of realism,” Hwang said.

“Flight simulators are the best training medium for pilots developed thus far,” said Jung Sang-yong, another captain at Asiana Airlines. “Even the pilots who completed training for flying A350 planes have to take about three days of training on the simulator every six months, by law.”

While plane crashes are very rare, they usually are shocking worldwide due the massive number of injuries or fatalities.

The A350-900 is capable of carrying more than 300 people, and this means that many people may get hurt at once.

To lower the chance of accidents and increase the chance of survival, even when accidents occur, Asiana flight attendants also are training for emergency landing situations from six months prior to taking delivery of the A350 model. An A350 door trainer was installed in Asiana headquarters in October to train crew members.

The goal of these flight attendants is to help evacuate all passengers from the plane within “90 seconds.”

The first of the four planes will be delivered to Korea in April. After receiving regulatory confirmation from the Ministry of Land, Infrastructure and Transport, the planes will be flown between Incheon and Osaka, Japan beginning next month and will be moved to longer haul routes later in the year.