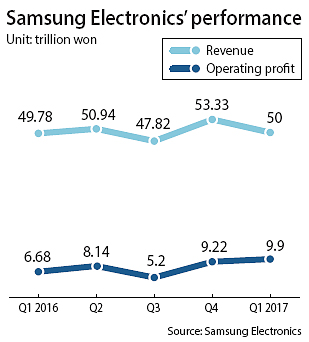 Samsung Electronics said it will report its second-largest operating profit in history for the first quarter of 2017. But the fine numbers owed more to its electronic component businesses, including semiconductors and displays, than smartphones.

According to the guidance released by the nation’s largest electronics maker Friday, revenues for the quarter should be 50 trillion won ($44 billion), up 0.44 percent compared to a year earlier, and operating profit should be 9.9 trillion won, a 48.2 percent year-on-year jump. Samsung’s all-time record was set in the third quarter of 2013, when the company inked 10.16 trillion won in operating profit.

The first quarter achievement is a surprise considering how the first three months of most years are tough for Samsung as it’s a slack period in the phone business.

Samsung has been releasing its Galaxy S phones in April and the Note series, a bigger phablet that comes with a smart pen, around September, which translate into weaker sales in first quarters.

Many expected this year to be particularly miserable after the flameout of the Note7 model, which had to be recalled and discontinued because of batteries that were prone to catching fire. In the mobile devices business, the company had to coast along on sales of the S7 that was released a year ago.

According to analysts, the company’s mobile division, which includes its smartphone business, is estimated to have made a 2.2 trillion won profit in the first quarter. That is a 40 percent cut from a year ago when the IT Mobile Communications division’s operating profit was 3.89 trillion won.

That contraction was offset by major gains in the semiconductor business. There has been growing demand for higher-spec memory chips thanks to the evolution of smartphones, computers and the expansion of Internet-of-Things (IoT) devices.

According to market research firm DRAMeXchange, the average price of 64gigabit NAND flash chips stood at $3.56 at the end of March, growing 9.54 percent from a month earlier. The price has been increasing by over nine percent for each of three consecutive months. “Semiconductor operating profit for the latest quarter is expected at a robust 6.1 trillion won thanks to higher prices of DRAM and NAND chips,” said Claire Kim, an analyst from Daishin Securities.

Display sales are also expected to have reaped in over a trillion won in profits as Apple and Chinese phone manufacturers use OLED (organic light-emitting diode) panels for their phones. Samsung Display - 84.8 percent of which is owned by Samsung Electronics - has a 97 percent market share of the small to medium-sized OLED panel market.

The second quarter outlook for the company is expected to be better as the newly released Galaxy S8 series of smartphones is getting positive buzz.

Preorders for the phone began in Korea on Friday while they began in New York and London from April 1. According to a forecast by global market intelligence Counterpoint Research on Friday, 50 million Galaxy S8 phones will be sold this year, which is higher than 48 million units Galaxy S7s sold last year.

With expectations high for the phone, analysts are looking to an earnings surprise for the second quarter ? possibly surpassing 10 trillion won. “It is highly likely Samsung will set a record operating profit of 12 trillion won in the second quarter this year,” said Lee Se-chul, an analyst from NH Investment & Securities.

Official earnings results will be broken down in detail on a conference call on April 27.

Still, there are underlying risks for nation’s largest smartphone maker. Its de facto leader Vice Chairman Lee Jae-yong is on trial for alleged bribery of ousted President Park Geun-hye and her close confidante Choi Soon-sil. The first hearing in the trial was held Friday in Seoul.

Also, the company lost a patent dispute with Chinese phone manufacturer Huawei and was fined 80 million yuan ($11.6 million) by the Quanzhou Intermediary Court in China, according to multiple media outlets including the Quanzhou Evening News Thursday.

While Huawei has filed several lawsuits against the Korean electronics maker, it is the first verdict. The lawsuit was against three Samsung subsidiaries operating in China and two Chinese electronics companies for making and selling Samsung phones that infringed a patent held by Huawei Device.

The infringed patent related to app icon displays on smartphones. According to Huawei, some 16 phones, including the Galaxy S7, infringed the patent.

Despite the positive earnings guidance, Samsung Electronics’ shares on the Seoul’s main bourse inched down 0.57 percent to close at 2.08 million won on Friday.

On the same day, rival LG Electronics released its tentative first quarter earnings report, which was above industry expectations. It predicted 14.66 trillion won in revenues and 921.5 billion won operating profit, up 82.4 percent year on year, powered by strength in televisions and home appliances.

LG’s estimated profit is also its second-highest following a record 1.24 trillion won in the second quarter of 2009.