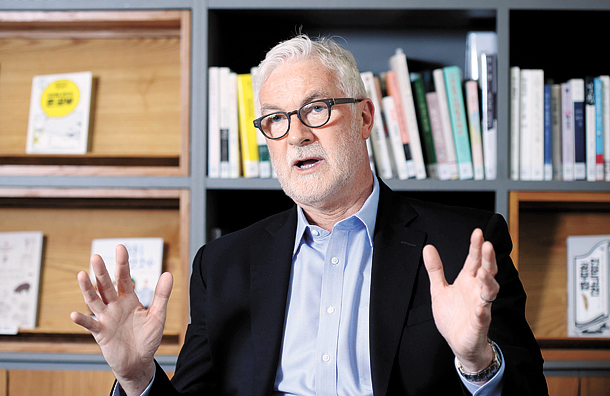 Richard Hardy, head of the elite Concord Academy in Massachusetts, at the JoongAng Ilbo office in Seosomun, central Seoul, on Feb. 11. “Since parents all over the world think similarly,” he said, “the thirst for education is the same. Believe in your children and be patient.” [KIM KYUNG-BIN]

Drew Gilpin Faust, the first female president of Harvard University, Caroline Kennedy, former ambassador of the United States to Japan and Queen Noor of Jordan, are all alumni of the prestigious boarding school, Concord Academy.

Located in the state of Massachusetts, Concord first began as an all-girls school in 1922 until 1972, when it became a coeducational college preparatory school. Currently, there are 370 students attending the school from 9th to 12th grade, with 10 percent of the student body hailing from overseas. Of these, there are 10 Korean students.

A JoongAng Ilbo reporter met with Richard Hardy, 61, head of Concord Academy. Hardy is Concord’s 10th head of school and is in his eighth year. Hardy travels the world to visit the countries of his international students at least once every year for a chat with their parents.

“At Concord, there are neither rankings nor a system of honors,” said Hardy. “I would rather children do sports and study for fun instead of competition.”

He added, “Teachers must help guide students in realizing their talents and interests.” At Concord, each teacher is responsible for seven students and holds a one-to-one interview per student every week. The headmaster is not exempt from this responsibility.

“I encouraged one despondent student on the quality of their writing, and nurtured their self-confidence. The result, the student’s plans for the future was to be a reporter,” said Hardy, who is far from being a “tiger principal.” Students at Concord Academy are on a first name basis with “Rick,” and approach him with ease. “People who find it difficult to approach find communication difficult,” said Hardy.

Throughout the interview, Hardy mentioned diversity at several occasions. “In order to overcome today’s contentious society, an educational environment recognizing diversity is necessary.”

Forty-five percent of Concord students live on the grounds. A significant number of teaching staff also reside in the dorms with their families and invite students every Saturday for home-cooked meals. Concord encapsulates a cross-section of society, where people of different ethnicities and ages live together as a family.

However, a year’s tuition for the boarding school is in the tens of thousands of dollars. For this reason, the school is well-aware of its role as an incubator for the children of the leisure class. In response to this, Hardy said, “One out of four of Concord’s students receive financial assistance and students of diverse financial backgrounds come together.”

Concord strongly encourages the use of tutors in the arts and physical education and students to “open their minds through new challenges.” “When new students are selected, their character is considered,” said Hardy. “The college essay would be more impactful when developing character through a breadth of experience.”

In regards to his thoughts on Korean students, Hardy said, “Including studying, they are diligent in whatever they do. At first the children and the parents were only interested in their grades, but as they continued in school, gradually their outlook widened through tutoring. Parents, just as you didn’t find happiness through grades, please be patient and have faith in your children for their happiness.”

Hardy received a B.A. in political science and government at New Hampshire University, an M.A. in creative writing at Brown University and started his career as an English teacher at Milton Academy in 1983. Having taught for 35 years, Hardy said, “Nowadays, digital education such as videos are promoted, but it is urgent now more than ever to have face-to-face education.”