Reporting seniors’ stories from the back of a country bus

Reporting seniors’ stories from the back of a country bus 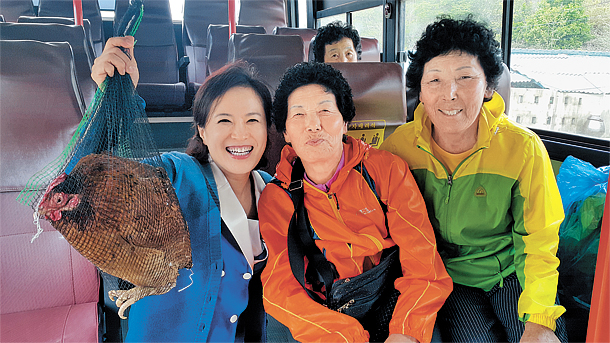 Kim Jeong-yeon, left, a reporter and singer, holds a chicken with one hand while on a country bus. [CHOI JEONG-DONG]

Kim Jeong-yeon, 48, is known to some as a rural idol and a national guide. Since 2010, the broadcast reporter and singer has been reporting the stories of rural elderly during a show called “Country Bus” on the long-running program “6 O’clock My Hometown.”

For eight years, Kim has traveled by bus a total of 400,000 kilometers (250,000 miles). She is registered in the “Korean Guinness Book of Records” as the person who has taken the most country buses.

When she gets on a bus, she gets enthusiastic cheers from older passengers. Now people cannot imagine “Country Bus” without her. Like talking with a daughter, they open their minds and tell their stories to Kim.

“I’ve seen a lot of things that cannot be seen in the city, such as a puppy in an onion net, rat poison and a conventional toilet bowl,” Kim said. “‘Country Bus’ is a true reality show.”

An older couple who are helping leukemia patients after losing their daughter to the disease, a grandson who gave his first salary to his grandmother, a daughter who donated her liver to her father and a son-in-law who took care of his mother-in-law who had dementia are just a few of the stories Kim has reported on from the rural areas.

Recently, she collected the stories and published a book. “I want to share the stories of older people who gave me courage and hope when my life was miserable,” she said. “When I heard their children’s stories, I realized I wanted to be a mother, so my son is a gift from them.”

Last month, Kim hosted a free concert for senior adults at the Art Hall in Yeongdeungpo District, western Seoul. “As a reporter and a singer,” she said, “I would like to hold a concert tour for senior adults who feel cultural alienation.”