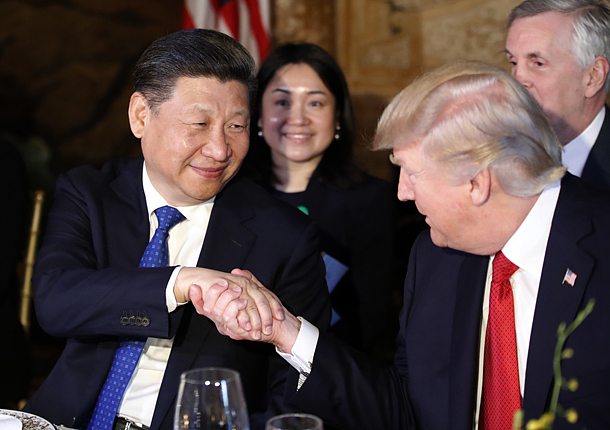 North Korea wasted no time as the leader of its closest ally arrived in Florida on Thursday for a summit meeting with U.S. President Donald Trump, while the White House showed more resolve than ever to pressure China to use its leverage over the Kim Jong-un regime.

In a statement issued by the Foreign Affairs Ministry and carried through the state-run Korean Central News Agency (KCNA), the North said the United States had “crossed the red line.”

The report read, “If a war were to erupt on the Korean Peninsula, no matter who preemptively strikes first, the responsibility shall be with the United States, which stringently adopted anti-North Korea policies and deployed nuclear strategic assets and special operations forces [in South Korea.]”

In accordance to the Geneva Conventions of Aug. 12, 1949, which vows to protect civilians in the event of international conflict, the North said it would fire at only military facilities in the United States and South Korea.

China was not mentioned.

The statement was made Thursday night local time, just hours before Chinese President Xi Jinping and his wife arrived in the southern state of Florida for their first meeting with Trump at his lavish Mar-a-Lago resort, the “Southern White House.”

Senior officials in Washington had said earlier that North Korea’s nuclear development program and Beijing’s effort to curb it would be a priority of the talks.

North Korea’s saber-rattling comes as no surprise since the country has a habit of threatening to bomb the United States and its allies. But it coincides with alarming analysis from the website 38 North that a sixth nuclear experiment could be imminent, prompting local experts to wonder whether Pyongyang was forewarning one, as it did for its first through third nuclear tests.

It did not do so ahead of its fourth or fifth tests.

“Over the past four weeks, there have been unusually high levels of activity at the Punggye-ri nuclear test site,” said 38 North Thursday, based on recent analysis by North Korea experts Joseph S. Bermudez, Jr. and Jack Liu.

The North Portal, where the four most recent nuclear tests were conducted, appeared to be especially busy, the website added.

“This pattern of activity could mean a sixth nuclear test is imminent,” said the report, “but the imagery does not provide any definitive evidence of the installation of a nuclear device or the exact timing of such a test.”

Local authorities admit that a sixth test could come at any time. Thursday morning was mentioned as a possible date when the summit between Beijing and Washington kicked off. Another is April 15, the 105th birthday anniversary of late North Korean founder Kim Il Sung, current leader Kim Jong-un’s grandfather.

Pyongyang test-fired its first ballistic missile this year on Feb. 12, while Trump was hosting Japanese Prime Minister Shinzo Abe at Mar-a-Lago. Both leaders rushed to call a joint press conference at the estate just a few hours after the launch, in which Trump briefly said, “I just want everybody to understand and fully know that the United States of America stands behind Japan - its great ally - 100 percent.”

On his way to Florida on Thursday, Trump reportedly told journalists on Air Force One that he thought China will “want to be stepping up” in trying to deter North Korea’s nuclear ambitions, according to the AP.

It is unclear whether the two leaders have actually discussed the issue yet, but the AP wrote that, ahead of dinner, Trump said he and Xi already had a long discussion and “developed a friendship,” after which he joked, “I have gotten nothing, absolutely nothing.”

U.S. Secretary of State Rex Tillerson reportedly told journalists after greeting Xi at the airport that he was “hopeful” China would find ways to scrap North Korea’s nuclear weapons and missile program.

The symbolic meeting between the two superpowers came two days after North Korea fired a ballistic missile off its east coast Wednesday morning, which flew about 60 kilometers (37 miles) before coming down in the East Sea. It was the fourth missile test this year.

The UN Security Council said Thursday it “strongly condemned” the latest missile launch, calling it a “grave violation” of the country’s international obligations under six of the body’s resolutions passed between 2006 and 2016.

The 15 members said they were concerned about North Korea’s “highly destabilizing behavior” and “flagrant and provocative defiance of the Security Council.”

The EU expanded its unilateral sanctions against the regime Thursday, saying it decided to expand the prohibition of investments in the North to new sectors, namely the conventional arms-related industry, metallurgy and metalworking and aerospace.

Japan also decided Friday to extend a trade embargo and other unilateral sanctions against the North for two years beyond their expiration date of April 13, according to the Japan Times. The sanctions to be extended include a ban on Japanese port calls by North Korean-registered ships.