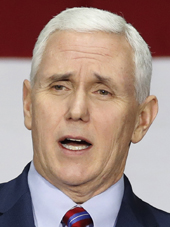 U.S. Vice President Mike Pence will visit Seoul on April 16 during his first trip in office to the Asia-Pacific region.

Pence is the third senior government official from the Donald Trump administration to touch down in South Korea at a time of growing tension with the North — and as Washington tries to form a policy on Pyongyang’s nuclear weapons threat.

The White House announced in a statement Thursday that Pence will travel to South Korea, Japan, Indonesia, Australia and Hawaii from April 15 to 25 in that order to "emphasize President Trump's continued commitment to U.S. alliances and partnerships in the Asia-Pacific region, highlight the administration's economic agenda and underscore America's unwavering support for our troops at home and abroad."

Pence will arrive in Seoul April 16 and leave two days later. The vice president will spend Easter Sunday with U.S. and South Korean troops and their families, after which he will meet with Prime Minister Hwang Kyo-ahn, who concurrently serves as acting president, and National Assembly Speaker Chung Sye-kyun.

Pence will also participate in a "listening session" with local business leaders and give remarks to the business community, the statement said.

In Japan, where he will stay from April 18 to 20, Pence is scheduled to meet Prime Minister Shinzo Abe and lead the inaugural U.S.-Japan Economic Dialogue with Japan's Deputy Prime Minister Taro Aso. He will also meet with Japanese business leaders and tour the USS Ronald Reagan to give remarks to U.S. and Japanese service members.

The White House said Pence will travel with his wife Karen Pence and two daughters, who will separately make "cultural visits." A more detailed schedule was to follow in the coming days. In an apparent hint, Mrs. Pence wrote Thursday on her personal Twitter account: "Looking forward to visiting art therapy programs in Asia-Pacific!"

Pence will be the first U.S. vice president to visit Seoul in four years, after former Vice President Joseph Biden in December 2013. The Foreign Affairs Ministry said Washington's decision to pick South Korea as the first leg of his Asia-Pacific tour reflected Trump's "firm support" for the South Korean-U.S. alliance.

It remains to be seen just how far Pence's visit will affect China, whose furor over Thaad has led to numerous economic retaliations against South Korea’s economy, or North Korea, which since Jan. 1 has been threatening to fire an intercontinental ballistic missile (ICBM) capable of reaching U.S. mainland.

U.S. Secretary of State Rex Tillerson, who visited Seoul from March 17 to 18, said Beijing's economic retaliations against Seoul were "inappropriate and troubling" and asked Beijing to "refrain from such action." Three weeks on, the reprisals have only worsened.

On Pyongyang, Tillerson shunned any possibility of discussions with its leadership unless the country completely abandoned its weapons of mass destruction. He also warned of more economic sanctions against the regime and hinted at military action. North Korea fired two missiles off its east coast afterwards, although both were assumed to have failed.

U.S. Secretary of Defense James Mattis came to Seoul in early February, his first overseas destination after assuming office, and warned the North that "any use of nuclear weapons will be met with a response that would be effective and overwhelming."