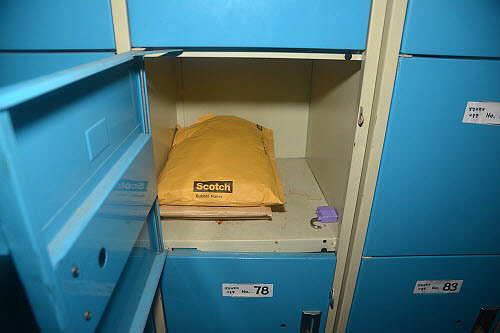 An envelope containing a bundle of bills amounting to 200 million won ($177,000) was found in a student locker at Sungkyunkwan University campus in Suwon, Gyeonggi.

The owner happens to be a professor of Sungkyunkwan University and husband to attorney, Choi Yu-jeong, who was arrested last year for her involvement in corruption.

The life science student association at the Sungkyunkwan University Natural Sciences campus in Suwon was undergoing spring cleaning on March 7 when they discovered a locked locker. Unable to identify the owner, they forced open the locker.

Inside they found a yellow envelope containing 1,800 50,000 won bills and 1,000 100 dollar bills. The student association immediately notified the school and reported this to the police.

The Suwon police poured through footage from the CCTV cameras on campus. However, as there were no CCTV cameras covering the lockers, the investigation did not progress. The students said the locker had been locked since August.

Fortunately, police were able to spot a man, later identified as a Sungkyunkwan University professor, moving towards the student lockers with a bag on Feb. 16.

The Sungkyunkwan University professor returned to the scene on March 8 to verify whether the money was still safely stashed there. Since there are no faculty offices in the vicinity of the student locker room and the area is generally not visited by professors, this piqued the interest of investigators.

Unluckily for the academic, that day happened to be a day after the student association’s report to the police.

The police found he was the husband of Choi and subsequently searched his office on Tuesday while requesting his presence at the police department. “At the request of my wife, I deposited [the money] at the locker,” he confessed.

The police said, “Although he did not say whether it was related to the criminal gains, he did acknowledge the money was connected to the [10 billion won legal fees].”

According to the police, before Choi was arrested on the charge of criminal gains, she phoned her husband last May to locate the ill-gotten cash at her Seoul safe deposit box and deposit it elsewhere. Finding the bills, he attempted to procure another safe deposit box, but in the end chose a locker after being unable to find a suitable location.

An official at the Suwon Jungbu Police Station said, “If he had come just a day earlier, there’s a possibility that [Choi’s] black money would not surfaced. We are expanding the investigation to determine as to whether there are criminal gains deposited in additional locations and if there are other co-conspirators.”

The attorney, Choi, was charged for having received 5 billion won each in legal fees from Jung Woon-ho, former Nature Republic CEO, and from another individual named Song for bribing the judiciary. Choi was sentenced to six years in prison and 4.5 billion won was confiscated, leaving the possibility of future discoveries.