Trump, Xi agree to work together to convince North to abandon nuclear program

Trump, Xi agree to work together to convince North to abandon nuclear program 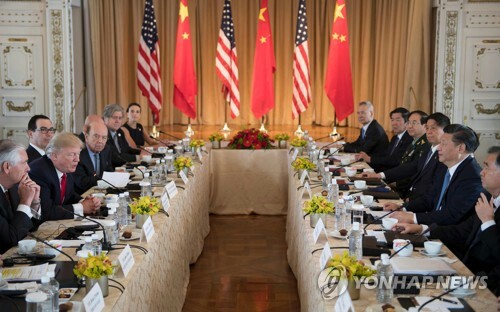 
The two sides reached the agreement, sharing the view that the North's nuclear advancement has reached "a very serious stage," Secretary of State Rex Tillerson said during a briefing on the outcome of the summit talks at Trump's Mar-a-Lago resort in Florida.

"The two sides noted the urgency of the threat of North Korea's weapons program, reaffirmed their commitment to a denuclearized Korean Peninsula, and committed to fully implement U.N. Security Council resolutions," Tillerson said.

"They agreed to increase cooperation and work with the international community to convince the DPRK to peacefully resolve the issue and abandon its illicit weapons programs," he said.

Tillerson said there was no "no kind of a package arrangement" on the issue.

"But there's a real commitment that we work together to see if this cannot be resolved in a peaceful way. But in order for that to happen, North Korea’s posture has to change before there’s any basis for dialogue or discussions," he said.

Trump told Xi that he welcomes any ideas China has on the issue and the U.S. would be happy to work with Beijing. But he also made it clear that the U.S. is "prepared to chart our own course if this is something China is just unable to coordinate with us."

The results fall short of high expectations that Trump would press Xi hard to solve the North Korea problem as the only country that has any meaningful influence over Pyongyang.

However, the talks produced progress in Trump's efforts to reduce the trade deficit with the world's No. 2 economy.

Secretary of Commerce Wilbur Ross said that the two sides agreed to a "100-day plan" aimed at increasing U.S. exports to China and reducing the trade deficit with the country.

The surprise Tomahawk missile strikes, which came in response to Syria's use of deadly chemical weapons against civilians earlier this week, was seen as a powerful message to North Korea, Iran and other rogue states that Trump can take military action against them at any time.

After the strikes, Trump addressed the nation and said that it is in the "vital national interest" of the U.S. to prevent and deter the spread and use of deadly chemical weapons. The same could be said of the nuclear weapons and ballistic missiles Pyongyang has long pursued.

The attack could also be a message to China that the U.S. may act on its own unless China reins in the North.

White House press secretary Sean Spicer said the attack "sends a very strong signal not just to Syria but throughout the world."

Earlier in the day, Trump said that "tremendous progress" was made in U.S. relations with China.

"I think we have made tremendous progress in our relationship with China. My representatives have been meeting one-on-one with their counterparts from China and I think truly progress has been made. We'll be making a lot of additional progress," Trump said after talks with Xi at his Mar-a-Lago resort in Florida.

"The relationship developed by President Xi and myself I think is outstanding. We look forward to being together many times in the future and I believe lots of very potentially bad problems will be going away," he said without elaborating.

It was unclear if the "bad problems" include North Korea.

In response, Xi said the two sides "arrived at many common understandings," including the need to deepen friendship.

"I believe that with the passage of time we will make efforts to bear our great historical responsibility for promoting the development of Sino-U.S. relations, to create prosperity for both countries and their people and to uphold global peace and stability," Xi said.

The summit came as North Korea has been ratcheting up tensions with a series of banned ballistic missile launches, including the latest one earlier this week, in pursuit of the development of a nuclear-tipped intercontinental ballistic missile capable of striking the U.S.

But Beijing has been reluctant to use its leverage for fears that pushing the regime too hard could result in instability in the North and even its collapse, which could lead to the emergence of a pro-U.S. nation on its border.

Trump said in an interview with the Financial Times published Sunday that China should help with the problem by using the "great influence" it has over Pyongyang, warning that if it doesn't, the U.S. will solve the problem on its own, and that "won't be good for anyone."

The Trump administration has shown increasing impatience with the North, with Secretary of State Rex Tillerson openly mentioning the possibility of using military options during a trip to South Korea last month. After Tuesday's missile launch by the North, Tillerson issued an unusually blunt statement saying the U.S. "has spoken enough about North Korea."

The summit was also watched closely as to whether the U.S. stands up to China for bullying South Korea for hosting the U.S. THAAD missile defense system designed to defend better against ever-growing missile threats from North Korea.

It was unclear if the issue was raised during the talks.