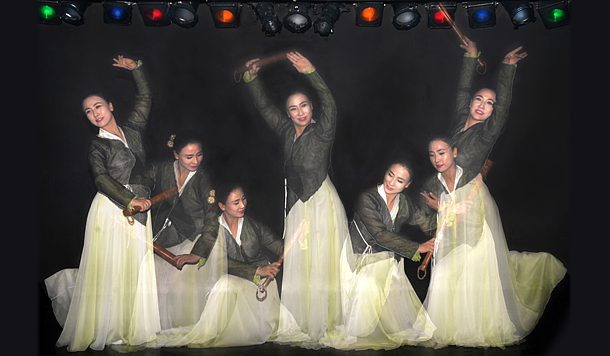 “My body was wrapped in inspiration. My overwhelmed heart and the cool waves led me to the Dragon King of the Sea. The pure white waves and the piece of soul that breaks into red bubbles! I try to embrace and rise from Dokdo (Korea’s easternmost islets). Dokdo’s heart beats and dives under the azure sky. That sense of feeling and inspiration continues. Dokdo tips me a wink, and I respond by telling Dokdo that I want to be immersed in it…”

This is a translated extract from choreography notes by Song Min-suk for her performance on the Dokdo islets in 2008.

Song, who studied Jongmyo Jeryeak (ritual music performed for Confucian ancestral worship rites), which is National Intangible Cultural Heritage No. 1, fell in love with Korea’s easternmost islets when she went there by chance. She found true beauty in the islets in the East Sea. The Dokdo islets were so beautiful that she could not stop herself from crying. So she promised herself that she would sing and dance in honor of the islets.

Song was born and grew up in Dongnae District of Busan, which is where the traditional Dongnae Crane Dance originates. Growing up seeing the dances of her hometown’s people, she naturally fell in love with dancing. Whenever she heard music in her childhood, she would always dance. Her first performance was “Marionette” at Busan Citizen’s Hall when she was just seven years old.

Though Song dreamed of becoming a dancer, that dream was almost shattered by an accident in her senior year of high school, when her body was crushed by a dump truck. The accident threatened her life, but she survived after undergoing four major surgeries. Although some may call her lucky for having narrowly survived, she could not help but worry at the thought of not being able to dance anymore. That was a brutal reality for an 18-year-old girl who dreamt of becoming a beautiful dancer.

But Song loved dancing too much to give up on it. While lying in the hospital, she convinced herself that she could not give up on her dream. She left the hospital five months later and started trying to move her body again. Through enormous pain, she flexed her muscles and endured. She gradually recovered and could once again dance elegantly.

Song studied dancing more after she entered university. She visited many regions of Korea to experience and study diverse Korean dances like pungmul (a Korean folk performance that includes drumming, dancing and singing), until she was trained enough to hold her first private performance in 1998 in Insa-dong in central Seoul. Since then, she has been called on to perform across the nation. 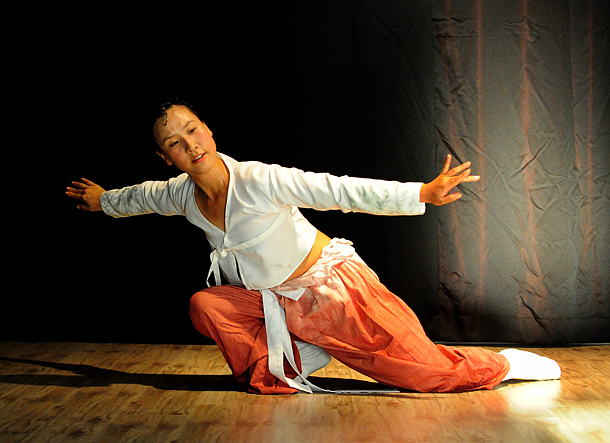 Song Min-suk expresses the look of a wild goose flying away through dance based on a poem about the seasons. [PARK SANG-MOON]

There is one main reason Song continues to dance: to communicate with the public. Though dance is metaphysical, there is no doubt about its existence as it is performed through one’s body. Just like she overcame the solitude and fear she felt in the hospital room when she was a teenager, she wishes to communicate with people through dance because that’s what makes her happy.

With such determination, she always stages performances wherever she is wanted. There, she meets audiences and interacts with them through dance. To guide people into understanding the attraction of dance, Song also gives lectures to people of diverse ages and backgrounds. Since Song’s dances are a creative take on traditional Korean dance, many can relate to them and enjoy them.

Recently, Song staged a performance with a renowned local guitarist, Kim Kwang-seok, where she danced to the rhythms of Kim’s guitar. The two made their audience laugh and cry throughout their performance. As such, communicating with the audience through dance is the kind of world that Song dreams of continuing to live in.