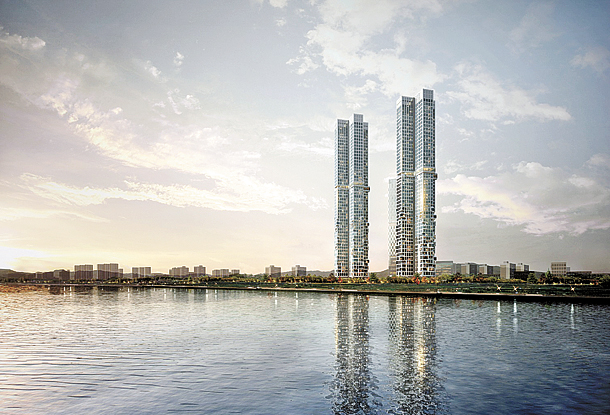 A huge construction fence has been erected across the street from exit No. 1 of the Seoul Forest subway station in eastern Seoul’s Seongdong District.

Currently the field covered with tall weeds is an empty lot. But in months, this location could transform into a new town for the rich. Not only does it have an easy access to public transportation including the subway, but it also has a great view of the Han River and the large city park Seoul Forest.

Daelim Industrial plans to start taking preconstruction orders on the high-rise apartment complex Acro Seoul Forest that will be built on the lot.

Daelim bought the land in 2005 and it has taken them 12 years to finally build the apartment. The complex will have residential and commercial units, along with cultural activity facilities. There will be two buildings of a mixed-use housing complex, along with D Tower, D Art Center. The mixed-use housing structures will be 49 floors high and can house 280 families.

Daelim bought 18,315 square meters (4.5 acres) of land from Seoul City Government in 2005 and planned to parcel it out in 2008. The prices reached as high as 45 million won ($39,773) per 3.3 square meters. However, it was right after the country was hit by the global financial crisis and only 29 people participated in the bidding due to the high prices. Daelim had no other option but to cancel the construction. It took another nine years for Daelim to restart the construction project as the real-estate market situation has improved recently.

The prices for Acro Seoul Forest have not been decided.

Daelim is focusing on building a luxury complex. The company plans to have every home to have windows on at least three sides of the apartments. Units below the 20th floor will have a balcony in each unit with a view of Seoul Forest. The heights of the rooms will be about 2.9 meters (9.5 feet) to 3.3 meters, which is higher than the average of apartments in the country at 2.3 meters.

The high-rise also will have an earthquake-resistant design.

“The complex will become one of the most luxurious apartments in the northern Seoul area along with Galleria Foret,” said Park Hap-soo, a senior analyst at KB Kookmin Bank.

Some disagree. “The real-estate market condition is not very good right now but there still is high demand for luxury apartments,” said Yang Ji-young, a team leader at Real Today. “The complex will not be affected too much by the prices thanks to its location and it is high in scarcity value.”

Daelim plans to open its model home in southern Seoul at the end of next month.