Some hot apps are all business, all the time

Some hot apps are all business, all the time 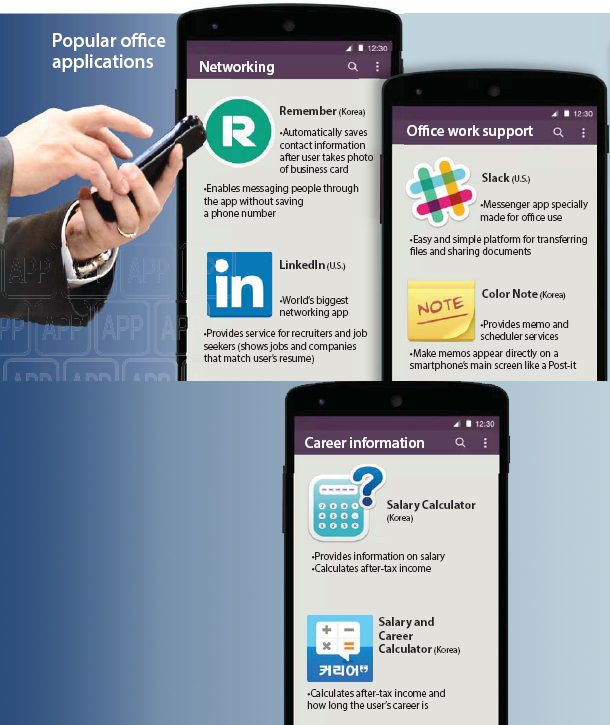 Remember is an app that’s popular among office workers. It was downloaded over 1.5 million times in its first year. Choi Jae-ho, CEO of Drama & Company, quit his job as a consultant after having the idea behind Remember: finding an easy way to organize business cards online.

In March, Remember added a messenger function that allows users who saved each other’s cards to talk to one another on mobile devices and computers. The new service has been popular with office workers who prefer to draw a clear line between their private and office lives. Remember keeps business contacts in their place.

For all the attention given to social and dating (or hookup) apps, apps for the business side of life are also experiencing a boom.

Young start-ups lead in this realm, prevailing over IT giants. The most popular relate to simple tasks like saving business cards or scanning documents. But there are others aimed to helping users get find information or communicate in a different and more efficient way.

Slack, one of the most beloved online office messengers, was created in 2013by a U.S. start-up by the same name. The app, which claims to be “intuitive,” provides chatting among team members as its main service. It is also used for organizing projects and sharing files.

Slack rose as an alternative to e-mail, which office workers use constantly at work. Although the service is mostly used via smartphones and tablet PCs, it is equally compatible with Mac and Microsoft computers. Slack currently has over three million users per day. Over one million users have paid to use an upgraded version.

Last April, IT giant Microsoft made an attempt to acquire Slack for $8 billion, but Founder Bill Gates and current CEO Satya Nadella decided to use the money to develop their own office-friendly services. In November, Microsoft released a similar service of its own called Teams but the market response wasn’t great. The general assessment is that Teams is not good enough to compete with Slack. Facebook also unveiled a similar service, Workplace, around that time.

In general, major IT companies are said to be less nimble than their younger peers in innovation despite having enormous capital.

The situation is similar in the Korean business app market. Color Note is a memo and scheduler application that enables users to make memos directly readable on the smartphone main screen, like a Post-it in real life. Released in 2009, the app was downloaded more than 100 million times. Its average monthly users are over 20 million people. Over 90 percent of its users are from the global market, despite it being a Korean app.

Apps that provide information on payments and careers are also gaining popularity in the app market. The Salary and Career Calculator app by job portal CareerNet shows one’s monthly wages excluding tax deductions. The app also calculates how long a user’s career has lasted in years and months. This is a common question in Korean corporate culture and it can be a nuisance to calculate if one changed jobs and had gap periods in between.

The reason apps created by start-ups are more successful than those developed by major IT players is because they have unique ideas that truly cater to unfulfilled needs. In Slack, for example, people can comment on every file uploaded by a staff member in the same “channel,” meaning chatting room. This file can later be opened by everybody in the company with a single click. It’s a virtual water cooler.