The passport in your pocket isn’t Grandpa’s

The passport in your pocket isn’t Grandpa’s 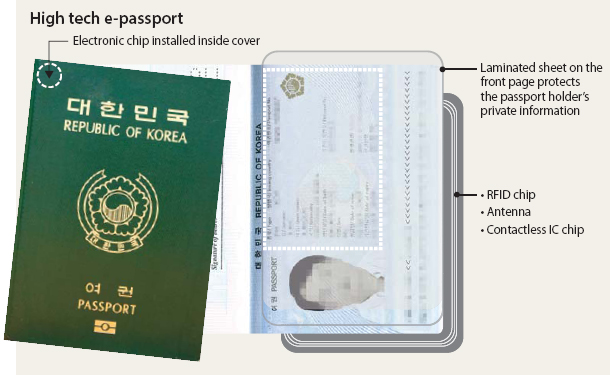 An electronic passport, or e-passport is shoved into a pocket of a pair of jeans and then thrown in a washing machine with 60 degree Celsius water and put through a 45-minute wash cycle.

The electronic chip and antenna installed in an e-passport is pounded with sharp objects such as a pen.

These are just some of the durability tests the Korea Minting Security Printing & ID Card Operating Corporation (Komsco) conducts on the current generation of e-passports. It takes about a month to go through all 90 tests. 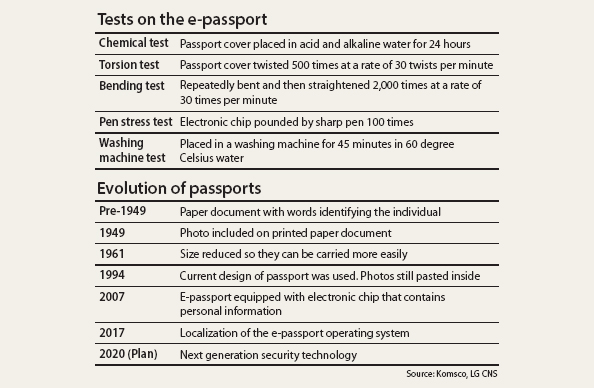 “We check if the personal information on the computer chip would be damaged if the passport accidentally ends up in the washing machine or a dog chews it up,” said Chung Young-ki, an official with Komsco. “We want to prevent anyone from being faced with the unfortunate situation of being detained overseas because his or her identity couldn’t be verified.”

This year’s marks the 10th anniversary of the electronic passport being introduced in Korea.

President Lee Myung-bak was the first to receive an electronic passport on March 1, 2007. The second recipient was his wife Kim Yoon-ok.

The e-passport has the same fundamental design as the past passports. One differences is that cover is made of special cottons, not stiffened paper. But the biggest change is that the rear cover contains a computer chip and antenna that verifies the identity of the passport holder.

As of January, 24.6 million out of the total 27.2 million passport holders have e-passports. The 2.6 million people still using the old, non-electronic passports are reaching the end of their 10-year validity. When they apply for new passports, they will get e-passports.

The history of passport development aligns with the nation’s security technology evolution.

During the Joseon Dynasty, a paper called jipjo served as a travel document. It was handwritten and stamped and verified the holder’s identification.

The current passport design and dimensions came out in 1994.

However, the paper passport was easy to forge, especially because the passport photo, which was glued into the document, could be easily swapped. Korea’s passports were favorites of forgers both at home and internationally.

The vulnerability to forgery was one of the reasons the U.S. required visas for Koreans wanting to visit for many years. With the improved security of the e-passports, the U.S. no longer requires visas of visiting Koreans.

Immigration agents at the airport can easily check the information printed in the passport with the data on the chip imbedded in the back cover. Not many forgers have the technological skills to change the information on a computer chip.

Additionally, if the passport gets damaged, a facial recognition system is used at airports that can recognize a passport holder.

This is why when passport pictures are taken, they must show the subject’s earlobes. They’re also not supposed to wear light colored clothes, which can disrupt the facial recognition system.

Since 2014, LG CNS has been working with a small company called JMP to develop an automation system that compresses the chip and antenna to fit into the cover of the passport.

The technology of the e-passport is expected to be upgraded in 2020.

An durable film polycarbonate used on windows and lenses will be applied to the page that holds the personal information of the passport holder in the next generation document.

Instead of the printing the personal information with ink, a laser will engrave the information on the enhanced film.

“With ink printing, the information can be erased using special solutions but if a laser is used, it makes it difficult to erase and replace information,” said Kim Yoo-jong, an LG CNS official.

“Because forgery techniques evolve accordingly to the development of the technology, there is a continuous need to develop security technology.”

The successfully localization of the e-passport security technology is likely to lead to some exporting of the technology overseas.

LG CNS said there are huge opportunities in emerging markets, including Southeast Asia and Central and South America, which still use paper passports.

The improvement in security of the e-passport is expected to contribute to expanding the number of countries that Koreans can enter without visas.

According to the British consulting firm Henley & Partners, Korea ranked third in Asia last year for the number of countries that waive visa requirements after Japan and Singapore. Koreans can travel to 172 countries visa-free. Globally, Korea ranked sixth.