Springtime is usually a peak time for car sales, as people are seeking outdoor activities with the arrival of warm and pleasant weather. Automakers competitively launch sales to catch these potential buyers.

Among them are also people in their 20s and 30s who have finally decided to buy their first cars.

For entry-level customers, the options are vast and complicated.

To lessen the burden of going through one consultation after another, the Korea JoongAng Daily recommends some of the best-selling entry-level models at major car dealers in Korea. 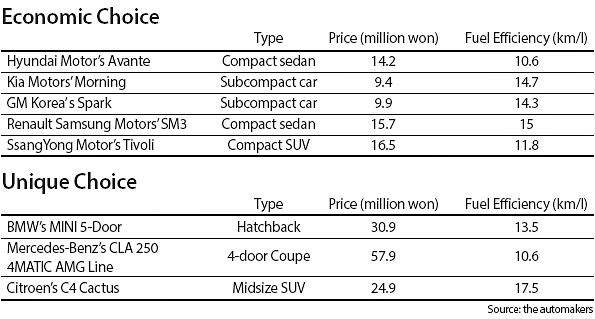 Price plays the biggest role when buying a car for young people with limited budgets.

In that case, subcompact vehicles, known for their affordability and high fuel efficiency, can’t be a better option.

Kia Motors’ Morning and GM Korea’s Spark are leading players in the segment. Kia’s all-new Morning launched this year boasts a fuel efficiency of 14.7 kilometers a liter (34.6 miles per gallon) with a starting price at 9.5 million won ($8,380). Kia Motors said it especially targeted female customers by adding the “Lady” trim, which is installed with extra lighting, mirrors and storage space.

GM Korea said 30 percent of the Spark’s 2016 sales were to people in their 20s and 30s, proving its popularity as an entry model. The subcompact model sells for 9.9 million won for the lowest trim and has a fuel efficiency of 14.3 km/l. For those who want more practicality with their car, a small sedan with larger trunk and passenger seat, is a segment to consider.

In fact, Hyundai Motor said 45 percent of its customers in their 20s last year purchased the Avante, its flagship compact sedan. The brand that launched in 1990 has built on its reputation for a youthful design and high fuel efficiency. The model starts at 14.1 million won and has a fuel efficiency of 12.4 km/l.

SsangYong Motor’s representative entry model is its compact SUV model Tivoli, which caused a boom in the segment last year.

With a brand slogan of “My First SUV,” thw Tivoli has been acknowledged for its sporty exterior design and implementation of diverse smart technology such as the ADAS system. Its price starts at 16.5 million won and has a fuel efficiency of 10.7 km/l.

Millennials have a strong urge to express themselves, and it goes with no exception for their choice of cars.

For those who want extra perks when driving, BMW recommends the MINI 5-Door, the brand’s first compact hatchback model that was introduced in 2014. The hatchback segment, which doesn’t have a huge following in Korea, will be enough reason to pick this hatchback model to stand out on Korean roads. It comes with 10 exterior color options and allows diverse customization for the interior, side mirrors and rooftop.

“The MINI’s iconic design and versatile color options makes it an attractive choice for young drivers. Also, its compact size makes it easier to drive and park for novice drivers as well,” a spokesman at the brand said.

One of the most popular entry models for Mercedes-Benz Korea is CLA 250 4MATIC AMG Line, a four-door coupe that boasts a sporty and expressive design with full implementation of aerodynamics. Its price starts at 57.9 million won, which is quite expensive, but a spokesperson at the company says the price is the bottom 15 percent among the lineup available at the German automaker.

It also recommended the SLC 200, a model that allows drivers to take the top off in all seasons with a high-tech heating system which pushes out warm air from the back of the driver’s neck and headrest. The price starts at 63 million won.

Among import models, Volkswagen’s entry cars such as Tiguan and Golf are suitable options. But with the diesel emission scandal last year banning a majority of its sales in Korea, French automaker Peugeot and Citroen have emerged as alternatives.

Peugeot’s midsize sedan 2008 which just underwent a facelift in February is the brand’s best-selling SUV model with a high fuel efficiency of 18.5 km/l. Its price has been downgraded by at least 1.5 million won, making its starting price 29.9 million won.

Citroen’s C4 Cactus has been popular among the younger generation looking for unique design. Its signature air-filled bumpers on both side doors gives it not only an aesthetic perk but protects itself from being scratched by a car parked next to it. Its fuel efficiency is at 17.5 km/l and also went through a price downgrade by 2 million won last month. Its price starts at 24.9 million won.

“The price drop has lowered the barrier for Peugeot and Citroen’s models in Korea, making it ever-more popular with younger customers looking for their first cars,” a spokesperson at the brand said.