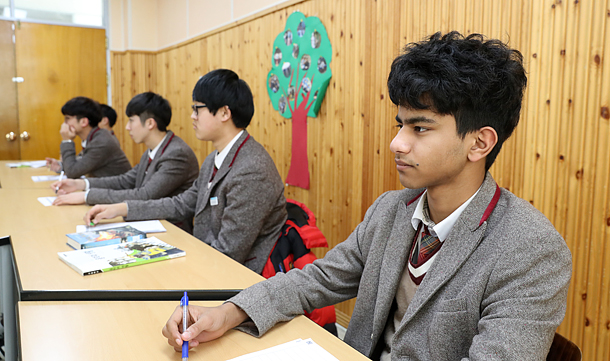 There are over two million migrants residing in Korea. Ten years ago, the majority of foreigners in Korea were foreign workers or marriage immigrants from China and Southeast Asia, but now, the backgrounds of resident migrants have become increasingly diverse.

The United Nations defines a migrant as a person who is or is not engaged in work in a country in which he or she is not a national.

Despite this change, the budget for migrant integration is still focused on multicultural families. The 2012 budget allocated for integration heavily focused on marriage immigrants and their children, accounting for 95 percent of the total, or 118.4 billion won ($106 million). There were 37,650 international marriages in 2007 and 23,316 reported in 2014, representing a mere seven percent of the total migrant population.

Yoon Kwang-il, head of the Institute for Multicultural Studies at Sookmyung Women’s University (SIMS), said, “The budget must be efficiently allocated for use by migrants, particularly focusing on attracting high quality human resources.”

Dasom High School in Jechon, North Chungcheong, is one example in microcosm on the efforts of the Korean government in facilitating integration. Opening its doors initially in 2012, Dasom High was the first technical school for migrants in Korea. Students of the school are either those who accompanied their parents and immigrated here or children of parents who gave birth to them while in Korea. From an assorted 15 countries, these 134 students sleep and eat together at the dormitory and learn valuable trade skills. Dasom High offers three tracks: installation, electrical and mechanical.

About 20 11th and 12th graders were gathered around the conference table, originating from places such as China, Pakistan and Mongolia. “The official language of the student association is Korean,” said Kim Hyeon-jeong, who is of Philippine descent and student president. “We have to submit how we are going to have [our pictures taken] in our yearbook differently from last year.”

“The coexistence of assorted cultures could be more or less uncomfortable, but it is not impossible,” said one staff member at Dasom High. The food is a poignant example. Hailing from Pakistan and of Muslim faith, Ali Usman, 20, ate white rice with a helping of seaweed flakes in lieu of the Spam-fried rice offered at the school. Usman said, “There are always other side dishes available at the cafeteria for students such as myself.”

“The hardest part about Korea when I first came was Korean,” said Kwon Ho-cheon, an ethnic Mongolian. “Recently, I received level 4 on the Korean Proficiency Test. After studying Korean, it is confusing as to whether I’m Korean or Mongolian.”

Zhang Bing-chen, who emigrated from China four years ago with her mother, said, “Since my Korean was poor, at first I was ignored. I don’t have the feeling quite yet of being a Korean.”

Earlier in the morning of March 14, the 12th grade students were in the process of adjusting a robot and attempting to automate it via computer connection. While Zhang was adjusting the wheels of the robot, she said, “I took the citizenship test last May, but since the results haven’t come out, I’m unsure whether I’ll be able to find employment after graduation.”

“Even if [students] receive a certificate,” said Kim Bum-nyeon, educational counselor for Dasom High, “if they can’t acquire [Korean] nationality, it is impossible to be employed. The Ministry of Justice is proposing issuing a temporary visa, however.”

In order to receive human resources, it must be ensured that migrants can also live well. But a testament to the unpreparedness of the Korean government is the absence of racial-discrimination legislation on the books.

“Migrants account for over four percent of the total population,” said Yoon, “which means Korea has become a multi-cultural society. By 2050, the percentage will be over 10 percent by the government’s forecast, so a practical migrant policy is urgent for social unity.”

But some, like Jeong Gi-sun, director of the IOM Research & Training Centre, criticize subcontracting and low wages which they claim are induced by the influx of migrants. “A system of distribution in society is necessary,” Jeong says, “and an opportunity to change the industrial structure through labor power must be made.”