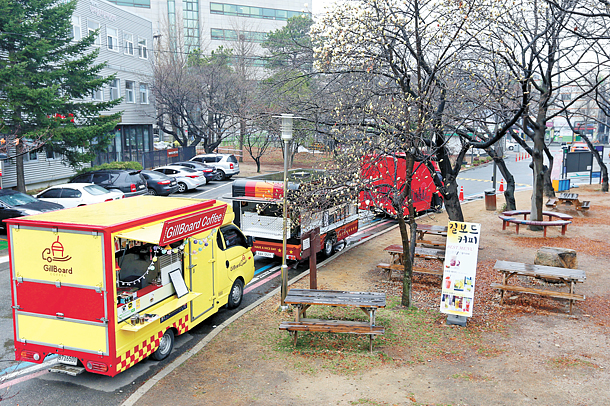 A food truck is planted nearby Innovation Park in Eunpyeong District, northwestern Seoul. While a commercial center is only 400 meters (1,312 feet) away, the locations where food trucks can legally operate are for the most part commercial blind spots. [KIM SEONG-RYONG]

After a year operating a food truck, 37-year-old Park Ja-hyeon ended her days as a culinary nomad and parked her business selling sandwiches and coffee at a permanent space last month.

Park now works in the vicinity of Seoul Innovation Park in Eunpyeong District, northwestern Seoul. But her daily revenue adds up to only 100,000 won ($89) a day.

“I come out all day every week, but the net profit is only 300,000 won,” Park lamented. “It’s fortunate that I can do business at one location, but the foot traffic is too little.” On the other hand, Park’s spot is only 400 meters (1,312 feet) from a local commercial center.

“Before I came here, I was lucky to work one day out of a week since I couldn’t find a spot,” said Park. “There are many food truckers who give up after a few months, being unable to secure a spot or cope with the 50 million won cost of food-truck renovation.”

Locations near subway stations or privately-owned areas are where food truckers inevitably come into conflict with pre-existing shops, often to the detriment of the truckers. Even if they locate a suitable space, they risk being fined if they are not given authorization from city or district authorities.

The only legal areas where food truckers can operate are public spaces that the municipal authorities designate as such.

The majority of these spaces are parks or in fronts of public institutions, where foot traffic is minimal. But the leases for available spots differ not only depending on the type of public property, but by each individual party. Moreover, when food truckers apply for available areas, only a few are given authorization.

“Considering the number of those who duplicated registrations in order to service multiple areas or those who temporarily closed, the actual number is likely to be fewer,” said Jung Jung-hee, official for food safety in the Seoul City Government.

It has been close to three years since food trucks were legalized under the direction of the prime minister’s office in August 2014, but they have so far yet to become a fixture of the urban landscape.

“Food truckers are well aware of areas where they won’t conflict with pre-existing business owners,” said 50-year-old Lee Gye-su, a food trucker. “All the city or district authorities have to do is examine the areas that we propose and give us permission.”

“We always have a window open for food truck operators,” said Kwak Jong-bin, an official at the Small Business Development Center of the Seoul City Government, adding that, “We are tirelessly exploring new areas of commercial interest and are in the process of examining a way to work with the cooperation of stores in the vicinity.”

“Untying regulatory knots may be the right decision, but it was rushed,” said Jung Gwang-ho, professor at the Graduate School of Public Administration at Seoul National University, “[The authorities] should have had thorough consultations with business owners or startup entrepreneurs and properly reviewed the scale of the market.”