Sewol moved onto land at last

Sewol moved onto land at last 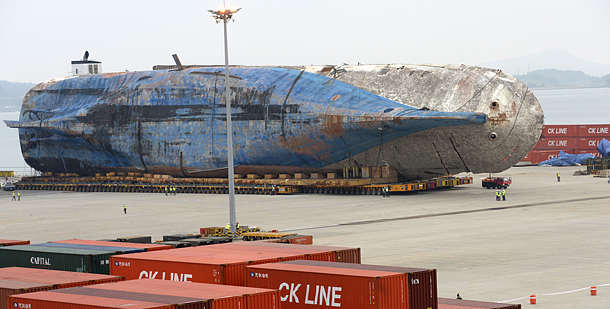 The Sewol ferry is lying on 600 modular transporters on the Mokpo New Port, South Jeolla, on Sunday, which transported the ferry from a semi-submersible ship onto the dock over some four and a half hours in the afternoon, rolling the 17,000-ton vessel completely onto the dock around 5:30 p.m. [YONHAP]

The 17,000-ton salvaged Sewol ferry was unloaded from a ship and onto a dock in the Mokpo New Port in South Jeolla Sunday, where it will be examined to pin down the causes of its capsizing and searched for remains of nine victims and personal effects of all 304 killed.

The Ministry of Oceans and Fisheries confirmed Sunday morning that 600 modular transporters slid under the wreck of the Sewol and were able to withstand its weight. They started moving the wreck from 1 p.m.

“When the tides will start ebbing is the best time for transportation operations,” said Lee Cheol-jo, a Ministry of Oceans and Fisheries official overseeing the salvaging project at a press conference on Sunday morning at the port. “It may take some three to four hours until the ferry is completely on the dock.”

Workers slowly added compressed air into the ballast tanks of the semi-submersible ship carrying the ferry as the tide ebbed, keeping the ship level with the dock throughout the operation.

Once the ferry is in the port, the Oceans Ministry and Shanghai Salvage, a state-run company from China, will clean the ferry of remaining muck and oil. Workers will test whether it is safe for them to enter the vessel by sending in a robot first.

The Oceans Ministry released Saturday a photo taken inside the ferry by workers on Friday, who entered through a window on the fourth floor, near the bow of the ferry, from the port side. It showed that a section of the cabins had collapsed.

In the photo, all the walls of the cabins from the port side to the starboard side were destroyed. The workers advanced for some 24 meters (79 feet) from the bow toward the stern, before retreating from the ferry within an hour over fear of debris falling on them.

“The walls, made out of sandwich panels, must have collapsed as the Styrofoam material broke apart in the water,” said Kim Dae-yeon, deputy director of Korea Salvage, which is in charge of the investigation inside the ferry. “We couldn’t advance further than 24 meters because we were afraid that the debris hanging above our heads would crash on us.”

“They saw some bags and other articles inside but didn’t attempt to pull them out for fear that the remains of the walls and other structures may fall on them,” said Ryu Chan-yeol, director of Korea Salvage. “We will be working with the Sewol investigation committee to retrieve the articles in a careful manner.”

An underwater investigation of the seabed where the ferry lay from April 16, 2014, to March 22, 2016, when the ferry was lifted from the seabed, also commenced at 12:25 p.m. Sunday. The Oceans Ministry said 31 divers will take turns searching in pairs for remains or personal articles of the passengers.

“The divers will be wearing cameras on their heads to ensure that the search process is watchable by relatives of the nine missing victims,” Lee said.

“It’s not because we want to show the footage to the public. We will speak with the relatives and the Sewol investigation committee [made up of lawmakers and vessel experts] before footage is released, if there is a need for it to be.”

The workers found 20 animal bone pieces and 101 personal effects of passengers as of Sunday, including a cell phone, clothing and bags.

One of the bags was confirmed to have belonged to a Danwon High School student - one of 250 who died - who was identified by a school name tag in the bag.

The ferry sank southwest of Jindo, an island in South Jeolla, nearly three years ago.

It was carrying 476 people, 304 of whom, mostly high school students on a field trip, died. Nine bodies are still unaccounted for and relatives of the nine believe their remains may be inside the ship.

“The ferry will be placed in a fenced-off area measuring some 30,000 square-meters (7.4 acres) set apart for the investigation, cleaning and identifying articles found inside the vessel,” Lee said.

“We will give another briefing on the number of investigators to be dispatched from Korea Salvage and the ministry, but you can expect around 20 to 30 professional investigators, including forensic experts, on site.”