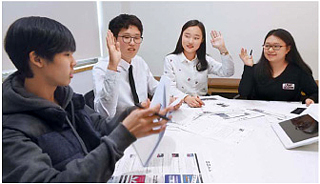 Teens may be familiar with social networking services and the internet, but can they distinguish between real and fake news?

The JoongAng Ilbo conducted a test for fake news on the affiliated Teen on Generation, or TONG, website. The subjects of the experiment were the teen reporters of TONG and their readers, who were assumed to be better informed than their age peers.

An online survey investigating teens’ navigation of news was conducted on March 19 with 116 participants in their teens, or those at least over middle school age. Before the survey was carried out, they were questioned on whether they could distinguish between real and fake news, and 58.6 percent said they could.

The first question included a screenshot from a regional news article on then presidential candidate Donald Trump attacking Hillary Clinton by allegedly saying, “If you want to see the end result of a female president, look at Korea’s female president.” Though it was already revealed to be fake news, the anonymous outlet has yet to take down the article.

Except for three people, the rest correctly concluded the statement was false.

The second question was an article regarding a high school principal withdrawing his school from using the controversial national history textbooks. This item was fake news, mirroring the JoongAng Ilbo online news format with text and pictures sourced from “Fatherland Ilbo.” As many as 69.8 percent of the participants considered the article to be authentic, with seven even recollecting about hearing it on the news.

The 35 who recognized it as fake news noted that they had never heard of the media outlet, “Fatherland Ilbo,” and another 20 thought it was curious that it was in the JoongAng Ilbo format with a different brand.

There were only eight that were familiar with the context behind the article and immediately dismissed it.

Next, subjects were shown a news story posted on Twitter or Facebook and were asked to judge its authenticity. They were presented with content from one weekly magazine, an online economics media source, KBS’ Facebook page and a fake media source.

The survey began with an inquiry into the credibility of selected news sources, first on distinguishing between articles and advertisements and secondly on determining authentic from fraudulent news pieces.

The JoongAng Ilbo presented color copies of screen captures from social networks and the internet. Of the seven outlets, four were real. The remaining three media outlets’ names, the articles’ content, link addresses and social network pages were all fraudulent. Students were questioned on the veracity of the articles after first rating their perception of the individual media outlets’ credibility.

The news from Facebook regarding the national history textbook controversy was believed by the four to be false. When one clicked on the link, one could even see the body of the article, but due to the unfamiliar name of the source and poor logo, there was some skepticism. In the end, three out of four concluded it was “real.”

“There was an article byline ‘Fatherland Newspaper Online News,’ typical of an article, and there wasn’t a specific thing that stood out, so I thought it was real,” said Kim.

All four identified the fake tweet from the website, gukjewatch.org, as fraudulent. “The article was questionable, having no picture and even having ‘solo’ in the headline,” said Kang.

Won agreed, saying, “The writing wasn’t organized and it wasn’t clear what the point was.”

There was a contrary reaction regarding news tweets by well-known broadcasting companies. When the students were presented with real news from a television station, the four claimed that it being a public broadcasting station was the most significant factor in determining the authenticity of the news.

On the other hand, when the four were presented with real news from private broadcasters, the students jumped to the conclusion that the content seemed groundless.

Their opinions were divided in regards to whether the economics media outlet and the weekly magazine were real news. Students were unfamiliar with the name of the news source and doubted its clickbait title, deciding it was fake.

The students’ perceptions of legitimate information was influenced by presentation, particularly whether the article came with a corresponding picture and headline.

“Keywords on hot topics such as ‘North [Korean] nuclearization” and ’Thaad’ are inserted to draw attention,’” Kang said regarding the economics outlet. But with regard to the weekly magazine’s article, Kang concluded, “It’s a media outlet I’ve seen quite often and the article’s contents seem real.”

In the end, there were three out of seven sources that the four students unanimously knew to be true. Two students correctly identified one correctly as real, one student identified two and all failed to identify one news source as fraudulent. At the end of the experiment, the students agreed it is difficult to distinguish real from fake news.

“I can easily see whether it is fake when it advocates for a particular party or politician, but in other cases, it’s hard to judge,” said Kim.

“In the future,” said Lee, “instead of making conclusions based on one article, I should search for many relevant articles.”

The four considered several factors in determining the legitimacy of news sources: their familiarity with the media outlets in question, the perceived objectivity of the articles and how they were written.

They did not have prior education on identifying legitimate sources.

“Since they were a group of [student reporters], they will be much better than the average teen,” said Kim Ah-mi, doctor of media pedagogy and a researcher at Gyeonggi Institute of Education. “It was interesting that they decided whether the news was real on a number of standards such as headlines, pictures, bylines and spelling. They’ll be able to spot fake news better than the generation of adults that only read newspapers.”