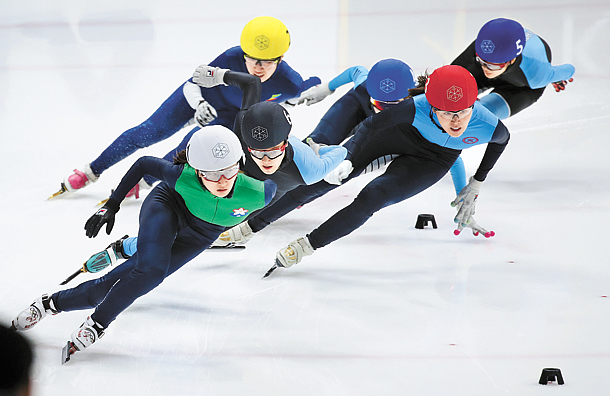 Choi Min-jeong, white helmet, races in women’s 1,500 meters superfinal race during the Olympic team trials at Mokdong Ice Rink in Seoul on Sunday. Choi finished first in all the categories she raced in. [YONHAP]

Two-time world overall champion Choi Min-jeong won the women’s Olympic short-track trials with ease on Saturday, while upsets abounded on the men’s side. 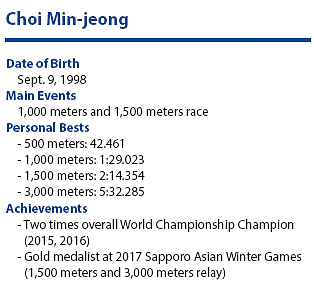 Choi, who won the world overall titles in 2015 and 2016, will be making her Olympic debut on home ice at the PyeongChang Winter Games next February.

She had a clean sweep of all races in two rounds of the Olympic trials. In the first round held last Wednesday and Thursday, Choi won the 500 meter, 1,000 meter, 1,500 meter and then 1,500 meter super final.

Choi, 18, will be joined on the Olympic team by three other qualifiers - Kim A-lang, Lee Yu-bin and Kim Ye-jin - along with Shim Suk-hee, who earned an automatic berth by finishing third overall at last month’s world championships.

Shim and Choi have dominated women’s short-track over the past three years and will enter PyeongChang 2018 as favorites to grab multiple medals.

Of the five, only Kim A-lang and Shim have previous Olympic experience. They teamed up for the 3,000 meter relay gold medal at Sochi 2014.

There were major surprises on the men’s side, where Lim Hyo-jun, a virtual unknown who has never even sniffed an Olympic spot before, won the trials. 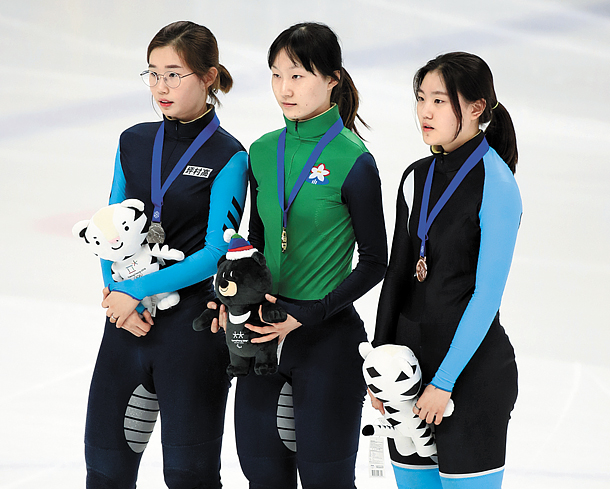 Choi Min-jeong, middle, poses for a picture after winning the 1,000 meter race on Sunday. [YONHAP]

Lim, 20, finished seventh in the 1,000 meter on Saturday but clinched the top spot in the trials by taking the 1,500 meter super final.

Two other no-names, Hwang Dae-heon, a 17-year-old high school senior, and Kim Do-kyoum, 24, also qualified for the Olympics, along with Kwak Yoon-gy, the 2012 world overall champion and 2010 Olympic silver medalist.

They will be joined by Seo Yi-ra, who won this year’s world overall title to clinch an Olympic berth.

Gone from the team are Lee Jung-su, double gold medalist at the 2010 Vancouver Winter Olympics, Sin Da-woon, the 2013 world overall champion, and Park Se-yeong, a national team mainstay since 2014.

South Korea leads all nations with 21 gold medals and 42 medals in total in Olympic short-track. The country’s depth is such that making the Olympic team is considered nearly as difficult as actually winning a medal at the quadrennial competition.