Kang kicks off 14th season with the Giants

Kang kicks off 14th season with the Giants 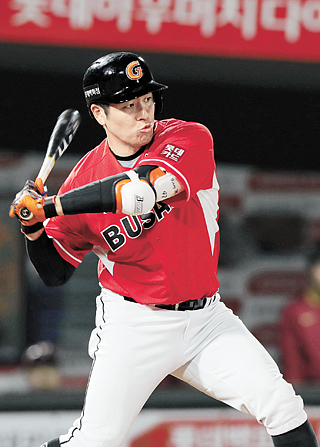 Since Kang Min-ho made his debut in the Korea Baseball Organization (KBO) in 2004, he has been playing for the Lotte Giants, and this season, both the Giants and Kang are off to a good start. During the Giants’ game against the NC Dinos on April 2, he hit two home runs to lead the team to a 12-5 victory.

“Since we have many games left until the end of the season, I don’t want to read too much into this,” Kang said. “I’m just glad I started my season without an injury.”

Last season, Kang suffered a knee injury, which is common among catchers. For treatment, he left to Japan during the season, but it did not help him much as he partially tore his ligament by the end of the season. Kang was named in the final World Baseball Classic roster, but he chose to spend time on treatment.

“Overall, it was a good decision,” Kang said.

With the return of Lee Dae-ho this season, the Giants’ batting line-up has gotten much stronger. Currently, Lee is the leader in KBO batting average at 0.457. Now, the Giants’ batting line-up of Son Ah-seop, Lee, Choi Joon-suk and Kang has become an object of fear for other teams. The return of Lee allowed Kang to pass on the role of captain to Lee.

“I can focus more on leading the young pitchers,” Kang said.

So far this season, the Giants’ young pitchers are off to a good start. Kim Won-joong and Park Se-woong both led the game to a win as starting pitchers while Park Jin-hyung also showed potential through pitching against the Dinos on April 2. Behind the strength of the young pitchers, there’s Kang, who helped them to be more aggressive in their pitching on the mound.

“I frequently tell the young pitchers to face the challenge rather than to run away,” Kang said.

Aside from Kang’s main role as the Giants’ catcher, he has strengths as a batter the team can rely on. Looking at his KBO career as a batter, Kang is only two home runs away from achieving 200 career home runs. Once he achieves it, he will be the 24th KBO player to hit 200 home runs. For the past seven seasons, Kang had been hitting two-digit numbers of home runs. Especially in 2015, Kang his 35 home runs in one season.

Towards the end of the season in 2016, Kang took off his glove and played for the Giants as the teams’ designated hitter.

Upon completion of 2017 season, Kang will be qualified as Free Agent (FA). For this reason, 2017 will be another important season for Kang.

“Since I’ll be a free agent, I’ll have to finish the season without an injury,” Kang said. “Personally, my goal is to start in more than 125 games this season. And I hope Sajik Stadium becomes the loudest karaoke on Earth once again with the return of Lee Dae-ho.”

The Giants, second in the KBO standings, will play against the SK Wyverns at 6:30 p.m. today.