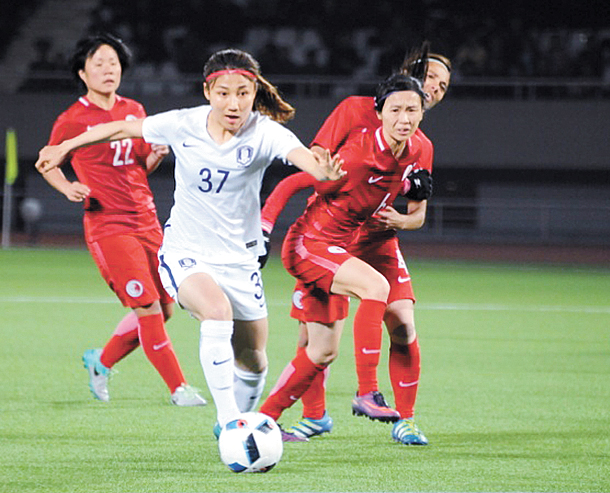 Yeo Min-ji, forward in white, dribbles the ball during the match against Hong Kong at Kim Il Sung Stadium in Pyongyang on Sunday. [AFC WEBSITE]

The South Korean women’s national football team, ranked 17th in the world by FIFA, has put themselves closer to advancing to the 2018 Asian Football Confederation (AFC) Women’s Asian Cup in Jordan by defeating Hong Kong, ranked 65th, 6-0 at Kim Il Sung Stadium in Pyongyang on Sunday.

The team got off to a slow start, scoring its first goal in the 44th minute. However, after half-time, the players brought back their competitive spirit and scored five additional goals to win against Hong Kong.

Throughout the qualifying matches in Pyongyang, the South Korean players fought through injuries, especially against North Korea on Friday. 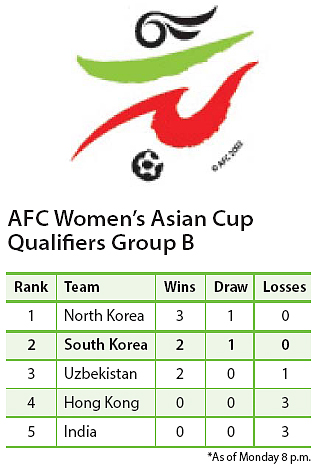 Aside from competing against other teams, they had to fight against the 50,000 fans who visited Kim Il Sung Stadium to cheer for the North Korean team.

The South Korean team encouraged each other prior to the game, when there was a tension between the players. During the match, Sung Hyang-sim scored a goal right before half-time, to help North Korea lead 1-0.

But South Korea did not give up, and in the 76th minute, Jang Seul-gi scored a goal to tie the game.

All the players who played against South Korea fought through the game with teamwork. Jung Seol-bin had a shoulder injury, but played until the end. Kim Jung-mi, the goalkeeper, injured her nose earlier in the game, but did not show any sign of pain.

“Not only did they have great skills and strategies, their strong mentality throughout the game stood out,” Kim Ho-kon, vice president of the Korean football Association (KFA) and South Korean football manager, said. “I hope the Korean men’s national football plays their 2018 FIFA Russia FIFA World Cup final qualification match against Qatar in June with this much passion.”

This is the first time since October, 1990 for a South Korean national football team to travel to North Korea to play a North-South Unification Match, and the South Korean team is surpassing all expectations. At the time, the South Korean men’s team lost its match 2-1.

As expected earlier in qualifying matches, the winner in Group B will be determined based on goal difference points.

With only one game left in the preliminary match, if South Korea wins against Uzbekistan by more than two goals, they will automatically earn a spot in the 2018 AFC Asian Women’s Cup as well as the 2019 FIFA Women’s World Cup in France.

South Korea will play its last match against Uzbekistan on Tuesday at Kim Il Sung Stadium in Pyongyang at 6:30 p.m.