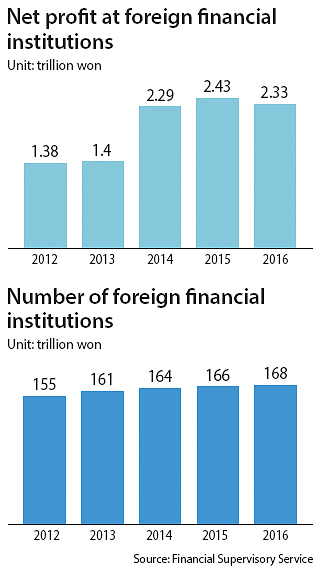 Net profit at foreign financial institutions operating in Korea dropped last year compared to the previous year, the result of major banks like Barclays and Goldman Sachs moving their businesses out of the country.

According to a report released Monday by the Financial Supervisory Service, the nation’s financial regulator, net profit last year at foreign financial institutions totaled 2.33 trillion won ($2 billion), down 4.1 percent from the previous year.

The decline is a turnaround from five years of continuous growth. Lim Sang-kyu, a director at the service, said the lower figure came from major banks closing their operations in Korea as part of their internal restructuring to respond to changes in the global business environment. “Low interest rates also had negative impacts on their net profit last year,” he said.

Certain types of financial institutions performed better than others.

Savings banks, on the other hand, had an excellent year. Net profit there grew more than fivefold to 163.4 billion won. In Korea, these banks are more like consumer finance companies that lend mostly to bad-credit borrowers.

The Financial Supervisory Service attributed the rise to savings banks expanding their operations last year, as the net number of foreign savings banks in Korea went up to eight from six in 2015.

Total assets of foreign financial institutions operating in Korea rose 3.9 percent to 402.6 trillion won, accounting for 8.9 percent of all assets owned by financial companies in Korea.

The net number of foreign financial institutions rose by two from the previous year to 168, and it has been growing for the past five years, the Financial Supervisory Service said. European companies accounted for the biggest portion, 36.3 percent, followed by Asian firms at 35.1 percent and American firms at 25 percent.

“Even though there were some foreign financial institutions that closed their businesses in Korea, the number of those who newly entered the country exceeded them,” Lim at the Financial Supervisory Service said. “We are seeing more Asian financial institutions entering the country to do business related to trade, corporate finance, money transfers and exchange services. We will continue to provide information and build networks to have more foreign firms enter the country.”