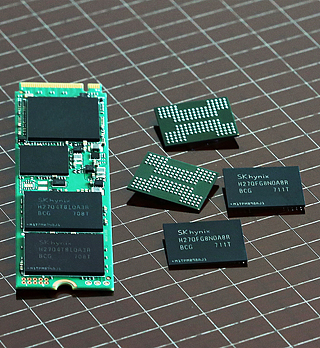 SK Hynix, a Korean producer of semiconductors used in computers and smartphones, has developed a high-density NAND flash memory chip that can hold 1.5 times more data-storing cells than its predecessor.

The company said the new chip, scheduled for mass production in the second half of this year, is the most advanced form of its kind. It is a 72-layer 256-gigabit 3D NAND flash chip, one of which can hold 32 gigabytes of information. This means a smartphone with 32 gigabytes of storage only needs to have a single NAND chip, thus reducing space and making possible the production of even thinner phones.

An SK Hynix spokesman compared the technology in the chip to stacking up four billion 72-floor buildings on a space equal to a 10-won coin. By applying a high-speed circuit, the company has doubled the chip’s processing speed and improved reading and writing ability by 20 percent over its predecessor.

NAND flash memory is a nonvolatile computer storage medium that doesn’t require power to retain data. It has emerged as a cash cow for chipmakers in recent years for its competitive edge over its counterpart DRAM both in terms of function and cost.

The company’s rival in memory chips, Samsung Electronics, currently the world’s top producer, rolled out a 64-layer chip late last year. It was a forerunner in NAND, beating SK Hynix in starting production of the 36-layer chip by two years in May 2014.

Demand for NAND flash memory chips has been steadily rising as device manufacturers offer smartphones, storage drives and other consumer electronics with ever higher storage capacity. The entry-level Galaxy S8, the most recent premium smartphone from Samsung Electronics, for instance, has 64 gigabytes of storage. The NAND flash memory market is estimated to total $46.5 billion this year and surge to as much as $56.5 billion by 2021, according to market researcher Gartner.

In tandem with the industry trend, SK Hynix said in January that it would mainly invest in expanding NAND flash memory manufacturing instead of DRAM.

SK Hynix has also joined the bid for Toshiba’s NAND business. Taiwan’s Hon Hai Precision Industry, also known as Foxconn, made an offer of nearly $27 billion for the Japanese tech giant’s chip business, according to the Japan Times on April 7, citing sources close to the matter.