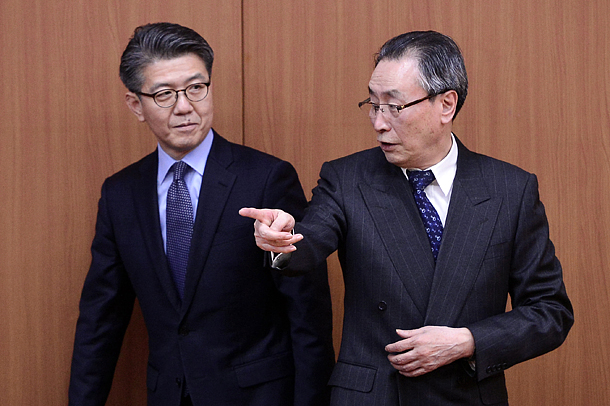 Wu Dawei, right, China’s top nuclear envoy and chief negotiator to the six-party talks, heads into a meeting with his South Korean counterpart Kim Hong-kyun at the Ministry of Foreign Affairs in central Seoul on Monday. Kim told reporters after the two-hour talks that in the case of additional provocations by North Korea, the two sides agreed to push for stronger UN Security Council sanctions resolution. He said they also agreed that “when North Korea is led toward the path of denuclearization, cooperation between the five-party countries (South Korea, China, Japan, Russia and the United States) is important.” His five-day visit comes amid China’s campaign to protest the deployment of the Terminal High Attitude Area Defense (Thaad) system, and Wu is expected to meet with key presidential contenders’ camps. [YONHAP]