Hong steps down as governor

Hong steps down as governor 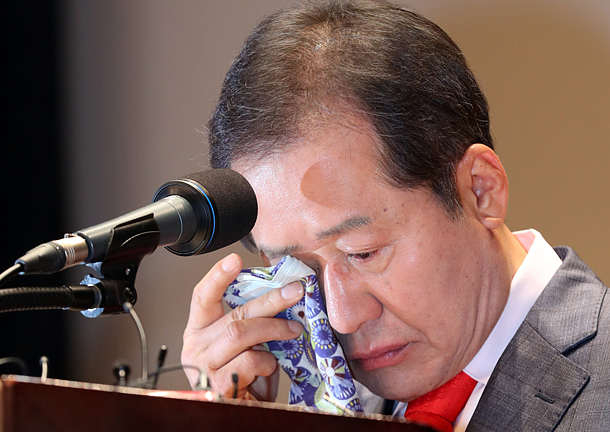 Hong Joon-pyo, the presidential candidate for the Liberty Korea Party, speaks at a farewell ceremony for the outgoing South Gyeongsang governor at the provincial office’s auditorium in Changwon, South Gyeongsang, on Monday. [YONHAP]

Hong Joon-pyo, the presidential candidate for the Liberty Korea Party, stepped down from his post as South Gyeongsang governor around midnight on Sunday, effectively barring the province from holding a by-election to fill the vacancy.

Hong submitted his resignation to Park Dong-sig, speaker of the South Gyeongsang legislative council, two minutes before midnight on Sunday, the deadline for vacating his post to run for president. Copies of the resignation were sent electronically and delivered in person.

The decision left no time for the provincial government to inform the South Gyeongsang Election Commission about Hong’s decision. After Park received the resignation, Vice Governor for Administrative Affairs Ryu Soon-hyun became the acting governor in Hong’s place. Ryu then had to notify the election commission by sending a formal document to confirm the resignation. The provincial government informed the election commission at 8 a.m. on Monday.

There will therefore be no by-election to replace Hong, and the next South Gyeongsang governor will be elected in next year’s routine local election.

Hong became the South Gyeongsang governor by winning the governorship by-election in December 2012, which took place on the same day as the presidential election. He was reelected to the post in June 2014.

Hong posted a message on his Facebook page to explain his action. He said he wanted to prevent a by-election to elect a governor who will serve for one year. “After a bloody effort, I was able to achieve a surplus in the provincial government’s finances,” he wrote. “I couldn’t allow tens of billions of won from provincial taxes to be wasted on a by-election.”

The outgoing governor also said he has already made all the major policy decisions for the next 14 months, which would have been the end of his four-year tenure had he decided to complete his term. As a result, he added, Vice Governor Ryu will not face an administrative vacuum.

A farewell ceremony for Hong took place at the South Gyeongsang Provincial Office’s auditorium on Monday, and Hong expressed his appreciation to the people of the region, shedding tears during his speech. As he left the building, however, he faced an angry crowd. Some individuals threw salt at his car, a traditional method of repelling evil spirits.

Opposition parties and civic groups condemned Hong for preventing an opposition candidate from becoming South Gyeongsang’s governor. They also said he deprived residents of the right to run for public office and the right to vote.

Huh Sung-moo, former vice governor of South Gyeongsang and a Democrat who was preparing for a by-election to succeed Hong, issued a statement criticizing the action. “He pillaged the political rights of the 3.5 million residents of the province,” he said.

The Justice Party’s South Gyeongsang chapter said Hong must retire from politics. “We wonder how such a person dares to run for president,” it said. “We will also ask the prosecution to investigate Vice Governor Ryu for negligence and abuse of power.”