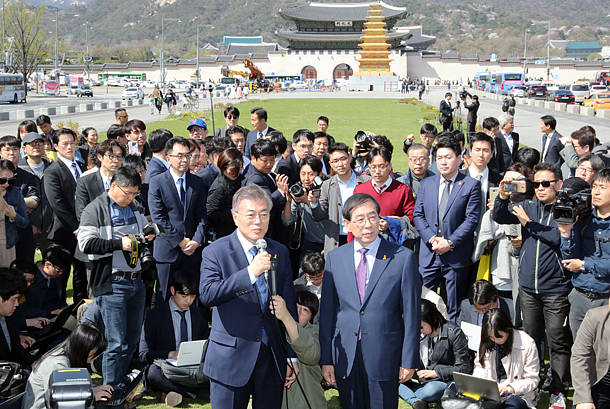 Moon Jae-in, left, the presidential candidate of the Democratic Party, along with Seoul Mayor Park Won-soon, right, visits Gwanghwamun Square in central Seoul on Monday, where he talked about his campaign pledge of moving the presidential office to the Gwanghwamun area. [YONHAP]

Democratic Party presidential candidate Moon Jae-in dismissed rival Ahn Cheol-soo, nominee of the People’s Party, saying he lacks “political principles and philosophy,” and expressed confidence that Koreans would elect him as president in the May 9 snap election.

Moon’s remarks, made during an interview with the JoongAng Ilbo on Sunday at a cafe in Seoul, came at a time of growing alarm inside the Moon camp over Ahn’s rise in the polls, effectively making it a two-way contest between him and Moon.

In the interview, Moon described Ahn as being backed by a conservative bloc trying to extend its grip on state affairs through the People’s Party candidate. Moon said that he represents a liberal base determined to carry out bold reforms.

But Moon’s uninterrupted lead in polls has ended. According to a poll conducted by Korea Research over the weekend, Ahn’s popularity surpassed that of Moon’s in a race among several candidates for the first time. Ahn had 36.8 support compared to Moon’s 32.7 percent.

Asked about a remark he made last year that he could visit Pyongyang before Washington if elected, which drew a backlash from conservatives, Moon said the foundation of Seoul’s diplomacy rests upon the Korea-U.S. alliance, an attempt to quell concerns that he would undermine those bilateral ties.

Moon’s interview was one of 16 interviews the Democratic Party (DP) candidate gave over seven hours at the same venue Sunday.

Nearing the end of the interview with the JoongAng, which sat down with the candidate at 8:20 p.m., one campaign aide said the day of interviews was taking a physical toll on the candidate, saying he was “exhausted.”

Below is an edited version of the interview with Moon.

Q. What is your take on Ahn Cheol-soo?

A. He used to promise “New Politics” five years ago in the 2012 presidential race. But all he talks about now is being against Moon Jae-in. While I see in him a strong will for success, as demonstrated with his business success (prior to joining politics), it is hard for me to see a clear vision of political principle and philosophy.

Your solid lead in the polls has been shaken by Ahn’s fast ascent.

I have a strong belief that the people will overwhelmingly vote for a change of power. On that note, people will make a wise judgement on determining which candidate is supported by a corrupt establishment class trying to extend their control in state affairs.

But Ahn declared that he would not forge a political alliance with the conservative parties in his bid for the presidency. Given that, how can you say he is backed by the conservatives?

I am not talking about conservative voters, but the political forces on the right. Isn’t it clear that Ahn is drawing support from the corrupt establishment? Liberty Korea Party lawmakers are openly saying they are willing to endorse him and the People’s Party is looking for such endorsement. While it may not be clear what Ahn’s support base is right now, the nature of the current race - a contest between the corrupt establishment and the people’s strong demand for reform as demonstrated by the candlelight vigils ? is becoming clearer as we go along.

Ahn criticized you as an incompetent politician who only inherited the legacy of the Roh Moo-hyun administration while describing himself as one who rose entirely on his own.

Such a remark makes it clear that Ahn does not belong to a political faction that wants a change of power. His stance is just the same as the former conservative ruling party. While he talks about a change of power on the stump, he is trying to win with the support of the corruption-laden power circle. What I want to achieve through my victory is to form a third-generation democratic government that is a rightful successor to the Kim Dae-jung and Roh Moo-hyun governments. I will inherit the two administrations’ legacies but also transcend their shortcomings and limits. Ahn talks about achieving his success on his own. But in fact, he was born with a golden spoon in his mouth and has lived a life of privilege. On the contrary, I have lived my life empathizing with the suffering of the people through my civic duty and as a human rights lawyer.

There is strong anti-Moon sentiment among older voters and in some particular regions. Against this backdrop, are you sure that you could achieve national unity?

Any politician has supporters and detractors. I am running with a firm determination to become the first president with an even support base around the nation. I will strive to show the people that I am capable of managing state affairs in a steady manner.

Your think tank Peoples’ Growth has nearly 1,000 professors under its wing, and they would want positions in your government. How can you answer to all their demands if elected?

I cannot allow the same mistake made by the Park Geun-hye administration to be repeated as president. Such a mistake will take a toll on the people. The three most important criteria for cabinet positions will be ethicality, ethicality and ethicality. I was renowned for the strictest ethical standards when it came to personnel management during my time as presidential senior secretariat for civil affairs in the Roh administration. I will carry out a transparent personnel appointment system under my leadership.

Korea’s economy is facing two problems simultaneously: Economic stagnation and widening economic inequality. How would you address the two?

Economic inequality is the most urgent matter to be fixed. The country is increasingly trapped in low economic growth affected by a declining population and weakened growth momentum - none of which have easy answers. I will achieve overall economic growth for the people.

Your remark last year that you could visit Pyongyang before Washington as president sparked controversy. Do you still hold that position?

It is very clear that the foundation of our diplomacy lies in the Korea-U.S. alliance. At the same time, we should enhance relations with Japan as well as Russia while also enforcing our partnership with China.

You said at a forum in December that you were ready to solve North Korean’s nuclear gridlock. How you would you do that?

I have readied bold solutions encompassing all possible mediums, including sanctions and negotiations that address the fundamental roots of North Korea’s nuclear ambitions. Taking into account the urgency and seriousness of the matter, we should at first stop Pyongyang’s further advance into the nuclear program and after that I will take steps for its complete shut down.

How has your welfare platform changed compared to the 2012 race?

I have strengthened welfare programs that would guarantee minimum income levels and raise our low birthrate. Compared to 2012, I added welfare benefits for child rearing and for those seeking jobs. The monthly basic pension benefits will be increased to 300,000 won($262). Current pension benefits are 40 percent of previous salaries. I will raise that to 50 percent.

The country is facing an existential problem stemming from the low birthrate.

The government has poured in trillions of won to raise the birthrate but to no avail. I have come up with policies taking lessons from past failures. I will make it a norm for fathers to take a paternity leave and raise the salaries given on paid leaves. I will also increase the number of state-funded day care centers so that four in 10 children will have access to them.